I enjoyed Karen M. McManus’s One of Us is Lying (Penguin Books) so much I read her second novel Two Can Keep a Secret (Penguin) as soon as I received an advance copy. I’ve had to wait impatiently until now that it is published to review it and, because Karen’s style is so addictive, I’ve added a mention of One of Us is Lying as well.

In Two Can Keep a Secret, teen twins Ellery and Ezra have just moved to Echo Ridge, Vermont, to stay with their Nana. Their mother, Sadie was also a twin. She was homecoming queen, left home when she turned eighteen and is now in rehab and too unwell to care for her children. Homecoming queens seem to be the target of tragedy in Echo Ridge, particularly in the theme park Murderland, recently renamed Fright Farm. 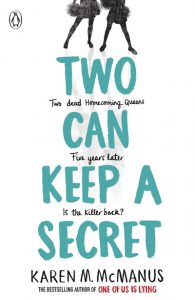 A popular young science teacher is found dead on the road, another girl goes missing and the disappearance twenty-three years earlier of Sadie’s twin Sarah seems to hang an ominous cloud over the present. Within three weeks Ellery and Ezra have “reported a dead body, gotten jobs at a murder site, and been targeted by a homecoming stalker…” Secrets are rife.

The narrative is told from the point of view of Ellery and Malcolm – who lives with his mother, stepfather and hot stepsister – and likes Ellery. His older brother Declan was the boyfriend of a murdered girl and his return to town coincides with more trouble.

This is a place where “anything different stands out a mile.” Diverse characters are Ezra who is queer and their new friend Mia who is Korean and has “her hair buzzed short on one side and streaked red on the other”.

The setting in a town shrouded in murder and Halloween-theme park where many of the local teens work delivers chills. 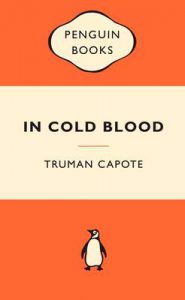 Ellery is fixated on true crime and has a collection of books that includes In Cold Blood, Midnight in the Garden of Good and Evil and Fatal Vision. She wants to do something for the missing girls, “and the ones left behind.”

Karen McManus’s first novel, One of Us is Lying, poses the fascinating conundrum of five students sent to after-school detention. One, Simon, dies there and the other four become suspects. Bronwyn is a brain who doesn’t break rules. Addy is a beauty. Nate is a bad boy. Cooper is a jock and Simon ran the school gossip app and was about to post secrets about each of the suspects.

(all quotes from the ARC)