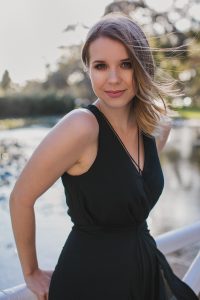 It describes a singular relationship and has an originality and authenticity that young adults will respond to.

Thanks for speaking with Boomerang Books, Krystal.

I’m currently based in Sydney, though I’ve also lived in Amsterdam and Hong Kong. I’m slowly becoming more involved in the YA scene here in Australia; most of my writing friends are based in the UK, so I feel a certain pull toward London, but I’m going to meet a few Aussie authors on my tour. Hopefully they’ll like me enough to keep in touch!

My first paid writing job was as a staff writer for my university’s what’s on magazine. It was a sweet gig. I got to go to red carpet events and interview celebrities like Matt Damon and Baz Luhrmann. After that I took over editing duties for a year, then worked as a foreign correspondent in Amsterdam before landing my book deal.

Where is it set and what inspired you to write Our Chemical Hearts? The book is set in the US… Somewhere… At the time of writing, I didn’t know US geography well enough to set it in, say, New York, so I left the specific location ambiguous.

What inspired me to write it? Gosh, so many things. It wasn’t like a lightning bolt out of the blue, that’s for sure. It was a slow burn of inspiration. It started with an image that became the first chapter: Henry in drama class, and Grace walking in. I wanted to know more about the characters, so I kept writing.

Major characters Henry Page and Grace Town are extremely memorable (love their names). Could you tell us about these characters?

Henry is optimistic but naïve, a classic hopeless romantic who believes in love at first sight and grand gestures. Grace is the opposite: a realist who’s had to grow up faster than most people and no longer sees love as something pretty and frilly.

How do you know and can write characters like these?

You don’t, not until you sit down and write them! The characters develop over time, becoming richer and richer the more time you spend with them.

Why did you write Murray, the Australian character, in such a ‘Steve Irwin’ style?

Whenever I travel or live overseas, I notice this strange phenomenon: Australians become hyper Australian. We talk about dropbears and how dangerous our fauna is (even though most of us have never seen a deadly snake in the wild). We say g’day a lot more and our accents tend to become more noticeable. A lot of the world sees us as “Steve Irwin style” and don’t know any different – so in order to protect his Aussie identity, Murray is essentially giving the people what they want.

Could you tell us something about the music and literary references you’ve included in the novel? They were mostly just what I was listening to or reading at the time – ‘Someday’ by the Strokes, ‘Hey’ by the Pixies, a bit of Elvis playing in the coffee shop when I was writing one day. The Pablo Neruda poem is one I’ve loved for some time, and it fit the story so well I couldn’t not include it.

Have you received any responses from young readers about Our Chemical Hearts that particularly resonate with you?

I’ve had several young readers tell me Our Chemical Hearts is their new favourite book, which – as a writer – is massive. The books we love as teens help shape us into the adults we eventually become, so having that kind of impact on someone’s life is simply mind-blowing.

I just finished the draft of my second book, which is a YA magical realism about fear and anxiety. I think readers are really going to connect with it.

My favourite YA books of the year so far are The Serpent King by Jeff Zentner, Highly Illogical Behaviour by John Corey Whaley, and This Savage Song by V.E.Schwab. Outside of YA, I adored Uprooted by Naomi Novak. I’m going on a five day, five state tour of Australia! If you’re in Perth, Adelaide, Melbourne, Brisbane or Sydney, I’ll be visiting a bookstore near you. Check my website for dates, times and locations.

Thanks for your really interesting answers and all the best with Our Chemical Hearts, Krystal.