‘Dazzlingly different … a novel about transformation that has the power to transform every reader. Tiffiny Hall is the new voice in children’s fiction.’  – JOHN MARSDEN 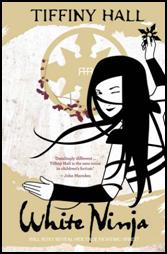 Her remarkable first fiction novel in a new trilogy for young readers,White Ninja, is the realisation of a life-long dream for Tiffiny, who was a writer and journalist long before she hit our screens on The Biggest Loser, Gladiators and The Circle. White Ninja is a mystery and adventure story about thirteen-year-old Roxy Ran, who thinks she’s just another ordinary girl until a confrontation with the school bully unleashes her secret ninja powers.

Says Tiffiny, ‘While I have a profile in health and fitness, exercising my creativity has always been my passion. Working on The Biggest Loser, I’d spend all my down time writing and reading in the Green Room instead of exercising with the other trainers. During filming of the long weigh-ins, I would imagine what Roxy would do next, what new ninja powers I could give her and choreograph her fight scenes. I realised on the show that people don’t need to lose weight as much as they need to gain confidence and self-belief. Many of my contestants were starved of self-belief as kids and I was determined to write a story that would empower children to feel invincible; to be warriors in pursuit of their dreams.’

Tiffiny will be embarking on a national book tour in September to promote the book, and will be a special guest at Nickelodeon’s SLIMEFEST shows (formerly the Kids’ Choice Awards) in Sydney on September 15. Fifth Dan Taekwondo black belt, athlete, Logie-nominated television personality, trainer on Channel Ten’s The Biggest Loser – there is no doubt Tiffiny Hall has many titles tucked under her black belt. Tiffiny has a Bachelor of Arts/Media and Communications and a Diploma of Modern Languages in French from the University of Melbourne. She worked as a print journalist before writing her first health books, Weightloss Warrior, Fatloss for Good and The Lighten Up Cookbook. Tiffiny is a popular speaker at schools and White Ninja is the first book in the Roxy Ran series for younger readers.