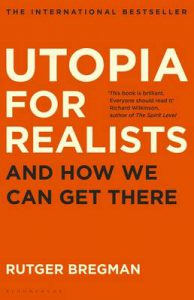 I dare say that few of us truly understand why our work and welfare systems are the way they are, and that many of us have thought, in at least in passing, that things seem a little back to front.

Dutchman Rutger Bregman has done more than think about the this-system-seems-broken concept. He’s researched and penned a case for universal basic income (UBI)—a foundational amount of no-strings-attached money for everyone—and other similarly counterintuitive concepts such as opening up international borders. (The latter warrants a post all of its own.) In the pragmatic, evidence-based Utopia for Realists, Bregman shows how these things could be not far-fetched idealism but economically viable realities.

‘The difficulty lies, not in the new ideas, but in escaping from the old ones’ is one of economist John Maynard Keynes’ famed quotes, which Bregman employs to emphasise his point. (Forewarning: Bregman quotes quite a few economists in this book.) And while many of the theories discussed in the Utopia for Realists have in truth been around for donkeys’ years, Bregman reintroduces us to them via fresh, illustrative case studies and wider historical contexts. Iconic popular culture cartoon The Jetsons even rates a mention.

A historian by trade, Bregman conveys traditionally fairly dense, dry subject matter in an accessible, engaging, storytelling- and context-based manner. That is, I actually kind of understood some of these concepts and their potential once Bregman had parsed their data. (Bregman’s Conversations with Richard Fidler interview also provides an audio overview of the book’s theories, and is fantastic to listen to to boot. I highly recommend queuing it up in your podcast rotation, stat.) Take the case studies for addressing poverty and, by happy proxy, a host of other issues.

One London-based 2009 study involved providing 13 men who had been sleeping rough long term with a modest, no-strings-attached sum of money. These were men who had spent decades on the streets and on whom the government inadvertently spent swathes of money through things like policing.

It turns out that, instead of frittering away the money as anticipated, the men were incredibly frugal and thoughtful in the way they spent it. Some even had some cash left over at the experiment’s close. This free-money experiment also saved the government a bunch of money as the need for policing and its ilk decreased.

Similar case studies, such as ones where entire poverty-wracked towns in Kenya, Uganda, and Namibia were provided a UBI, demonstrate equivalent results: people spent the money not on frivolous items but on things such as repairing homes and starting businesses. Although in the case of a Canadian experiment from decades ago, it’s only recently that they determined these results.

That’s because of a change in political climate mid-trial and a resultant nervousness about spending money analysing a ‘mincome’ (minimum income) experiment to give an entire town a UBI. It was one thing to have given away free money in the past, the powers that be surmised. It would be another to continue throwing money after it. So the analysis was shelved. Until recently.

It’s a sliding-doors moment because things might have been very different today if those decision-makers had had the courage to see the analysis through. It turns out the UBI was a resounding success and, rather than making people lazy, it improved life and society on a range of fronts. Truancy and teen pregnancy rates decreased, students stayed in school longer, and mental health issues and domestic violence rates improved too.

Similarly, a study of American First Peoples who benefited from the opening of a casino, of all things, reported similarly positive results. Bregman included this study to demonstrate that being poor affects your IQ and something as simple as having access to money improves it. Bregman cites economist Charles Kenny’s wise, if slightly circular, observation: ‘The big reason people are poor is because they don’t have enough money.’ He also cites, what is possibly my favourite quote of the book, which is from economist Joseph Hanlon: ‘Poverty is fundamentally about a lack of cash. It’s not about stupidity. You can’t pull yourself up by your bootstraps if you have no boots.’

To reinforce these quotes, Bregman points to findings consistent across these studies that giving money to people is more effective in addressing poverty than creating complicated bureaucratic and punitive-in-nature systems for them to navigate. Especially when their decision-making abilities are crippled by what’s termed a poverty-induced ‘scarcity mentality’.

Bregman cites George Orwell’s quote that poverty ‘annihilates the future’. It’s a statement Orwell was qualified to make having experienced poverty firsthand. UBI is, Bregman argues, an idea whose time has come, and I’m inclined to whole-heartedly agree.

Does Utopia for Realists contain all the answers to all the world’s problems? Obviously not. But it’s commendably at least trying to spark a rethink of how we’re rather unsuccessfully approaching wicked problems. The question is whether the people who have the power to introduce UBI and other similarly innovative concepts—to un-annihilate the future, if you’d like—are paying attention.