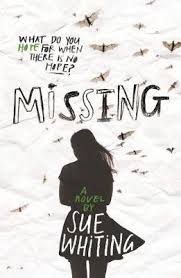 If you could turn back time, erase your mistakes, remember what you did with your car keys or even better, find those missing precious memories and loved ones, would you? These two middle grade novels explore the premise of losing someone inexplicably and the emotions produced through relentless searching for those missing loved ones. A Wrinkle In Time by Madeleine L’Engle

The IBBY International Children’s Book Day logo, ‘The small is big in a book’ certainly chimes true for A Wrinkle in Time. That it has stood the test of time is testament to this tale (first published in 1963), which I had never read as a child. If I had, I might not have recognised it as a bewitching hybrid of sci-fi, adventure, fantasy, and dystopia. For those living in another dimension like me or have not seen the movie yet, A Wrinkle in Time is a story of discovery and tenacity. It also (re)defines the power of friendship and love.

Meg, her genius baby brother, Charles Wallace and newly recruited friend, Calvin gamble on the help of three unorthodox strangers to find their missing father. The community believes Mr Murry has gone AWOL following years of silence whilst on a secret government assignment. The Murry children believe otherwise. Meg in particular is frantic to reunite with her father. Their desperate search takes them through time, to the brink of evil and the edge of insanity, which they not only survive but return to to rescue Charles Wallace after he is left behind on the evil planet Camazotz.

This book visits a galaxy of themes and possibilities. It encourages independent thought, squarely plonking children in the centre of the decision making-solution finding-save the universe process. Yet the comforting thing about this story is that while Meg and the boys face multiple near dear situations and many others that simply just make them sick to the core, the wise, guiding hands of Mrs Whatsit, Mrs Who and Mrs Which are never far away. Even when children are busy saving the world, it is reassuring having this sort of sanctuary of security and safety. They are after all, just children. Meg in particular is vulnerable and emotionally reactive. This makes her exasperating at times but also very relatable. Her impatience is perfectly tempered by caring Calvin and the enigmatic Charles. They all draw on the omnipotent strengths and wisdoms of these three women in a way modern day school children might look to a teacher or sports coach.

Would my ten-year-old self have enjoyed this time-travelling tale as I have? Quite possibly. I believe we happen upon stories at the times that we need them most in our lives. Perhaps one of the most moving passages in the new movie-tie in edition I experienced was in the afterword by L’Engle’s granddaughter. It mentioned how her  grandmother was often disenchanted as a writer, depressed by countless rejections and the futility of writing, always trying so hard with ‘nothing much to show for it’. Her unerring insight resonated with the author in me to the point of tears.

She portrays this same observational characteristic in her stories. Experience them for yourself with the rest of the Wrinkle In Time futuristic classic quintet series.

This is one of those stories whose emotional magnetic pull refuses to abate until the painful end. The awful reality of not knowing and mentally compensating for the abnormal and irrational situation of a person suddenly vanished from our lives knots together convincingly in this haunting narrative by Whiting.

This book is easy to read – I simply flew from one chapter to the next in anxious anticipation – yet it is hard to digest purely because of the subject matter. Having someone disappear so absolutely from your world must be wrenching. When that someone is your mother, it defies all comprehension.

Chapters representing before and after snapshots of Mackenzie da Luca’s life following the disappearance of her mother fire with an intensity that keeps you page turning and guessing at outcomes. It also fills you with a certain hope, which I can only guess is a fraction of the emotional torment those left behind must experience, never knowing what’s become of their missing loved ones.

Mackenzie is twelve going on ancient, zigzagging between being a young child, fearful and helpless to a frenzied, abandoned almost teen, desperate to solve her mother’s mystery and hang onto an expectation that may simply be a fabrication of her own terrible hope. Her supporting cast, Dad, Nan and a couple of uber charismatic friends, are all equally as solid and convincing. Each reacts in a way that both wounds and comforts Mackenzie. Each languishes in their own conflicting emotions thus intensifying the choking air of desperation.

Humour, abject despair and hopelessness balances frank tween conjecture as Mackenzie attempts to make sense of the wretched situation she, her father and Nan are enduring. Whiting maintains pressure on the tension pedal until the last desperate chapters where the then and now collide, finally providing Mackenzie with the answers she was searching for. Affecting, poignant and, terribly engrossing, this book will sadden and assuage simultaneously. Top marks for tweens and teens and all those having trouble with that thing called, closure.