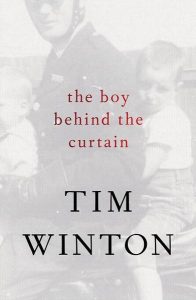 It has been an enlightening experience to read these essays about Tim Winton’s life in The Boy Behind the Curtain (Penguin, Hamish Hamilton). They fill some of the gaps in and between his books, as well as enhancing the books themselves and perhaps even allow us to vicariously experience some of Winton’s own life and passions.

Perhaps we now take the saving of Ningaloo Reef in Western Australia for granted. It was both fascinating and empowering to read the chapter, ‘The Battle for Ningaloo Reef’. This significant chapter is one of a couple that has particularly lingered after finishing the book. Powerful forces often barrage anyone who tries to stand up to moneymaking schemes. The struggle to save Ningaloo is documented by Winton so that we see the powerlessness of the underdog trying to fight determined developers. The protestors are often voiceless, even a prominent figure such as Winton. It seems only when persistence and a groundswell of people join the campaign that environmental icons such as Ningaloo can be saved. Tim Winton describes dead zones, areas where marine life can’t live, in ‘Sea Change’. He wrote the popular fable Blueback in 1997 and wonders if this unconsciously preempted his role as environmental advocate.

His love of the sea’s creatures extends to sharks. In ‘The Demon Shark’, Winton protests against the killing of sharks and compares them with bees, which actually kill more Australians each year. Removing shark fins from live sharks is unconscionable.

Poet Les Murray is referred to twice in the book. In ‘Holy and Silent: On Peter Matthiessen’s Blue Meridian’, Murray is quoted as describing ‘a sense of space’ as “the quality of sprawl”. Winton’s youth spent inhabiting the freedom of the coast, particularly by fishing and surfing, has continued throughout most of his life and is also outlined in ‘The Wait and the Flow’.

His childhood is memorably described in ‘The Boy Behind the Curtain’, where he stood, concealed, aiming a gun at those who passed by. Transformative experiences occurred when his father was hit by a car. A Christian man cared for him and Winton learned that strangers ‘could wreck your life and do you harm [but also be] capable of mysterious kindness’. This led to Winton and his parents becoming Christians.

Winton later refers to the question asked by Jesus in ‘Stones for Bread’, “If a child asks you for bread, will you give him a stone?” as pertinent to Australia’s treatment of children in detention centres. This is an issue about which he is seething. We also learn about some of his writing influences: Elizabeth Jolley as an unconventional mentor; the novel he dumped with enormous angst in ‘Lighting Out’; and the Irish cottage he lived in for a time in ‘Letter From a Strong Place’, with its strong echoes of The Riders.