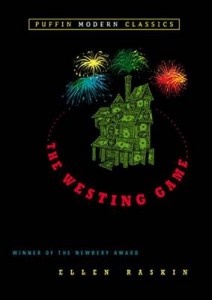 Every so often I’m reminded that of the sheer volume of good books in the world and the narrowness of my reading vocabulary. Ellen Raskin’s The Westing Game is one example of a book that had until recently escaped my awareness.

Hugely touted via a recommendation on a podcast I listen to (if I recall correctly, it was one of the co-hosts on the Pop Culture Happy Hour), The Westing Game sounded like a book I was remiss not to have read.

Even more so given it’s apparently a Puffin Modern Classic and a Newbery Medal winner (the book cover tells me so). It’s doubly mystifying, then, how this one escaped my book knowledge periphery.

Raskin, the book’s introduction tells me, was an illustrator before she was an author. The introduction was actually written by the book’s editor and is testament to the long history of knowing someone and giving them a chance that yields a fruitful, long-term relationship.

Raskin wrote The Westing Game for (and dedicated to) Jenny, a person whose identity I don’t know, but who purportedly requested a puzzle book. The Westing Game was the last book Raskin was to write and neither she nor her editor knew what it would be until Raskin had written it.

Raskin’s philosophy was apparently if she knew what was going to happen in a book in advance, she would be too bored to write it. As someone who has a similar writing style, albeit one not nearly as successful, I can appreciate and attest to that. (Even if I can simultaneously concede it’s not the most efficient writing style.)

Either way, her work is exquisite and mind-bending.

‘The sun sets in the west tower (just about everyone knows that), but Sunset Towers faced east,’ is the opening sentence of the book. It offers savvy insight into the off-the-wall elements The Westing Game contains.

Its premise is that an assortment of people—including a dressmaker, a secretary, a doctor, a judge, and a social climber—are first approached to live in Sunset Towers, then find themselves named heirs to be of a murdered millionaire recluse. The fortune will be theirs, they’re told, if they can make sense of the murdered millionaire’s cryptically bamboozling clues.

Raskin’s tale is captivating and her characters finely wrought; the tension in their relationships is intriguingly complex with none of the characters particularly likeable, but aspects of them being recognisable to many of us.

I’ll not deny I couldn’t quite keep any of the characters or clues straight in my mind, partly because Raskin pinballs the narrative all over the place, but mostly because my brain is not good as this stuff. Nonetheless, I enjoy The Westing Game sufficiently to both understand what the fuss was about and to be reasonably encouraged to recommend the book to others.

There are plenty of amusing moments wedged in among the mystery. These include: ‘Why are you standing there like a statue?’ Hoo (the father) shouts at (son) Doug after an explosion. ‘You told everybody to stay where they were,’ Doug replies, to which Hoo shouts: ‘You’re not everybody!’

Then there is the jittery chaos that sees the bomb squad called in several times after two bombings in the building. One call-out turned out to be for suspicious package found to be a dust-filled vacuum cleaner bag.

Another was for a box of chocolates delivered by a husband to his wife: ‘What do you mean, how come?’ he asks incredulously when questioned about his actions and motives. ‘Can’t I send candy to my wife without getting the third degree? I thought you were looking on the thin side, ok?’ he says to his wife. She makes him eat the first piece of chocolate. Just in case.

Raskin won the Newbery Medal for this book in 1979, long before many of us were born. The award’s bestowed on the author of the book deemed the most distinguished contribution to American literature for children for that year.

That The Westing Game is still in print and being discovered and relished by readers is testament to its award-winning worthiness. If you haven’t yet read it, as either an adult or child, I most definitely recommend you get round to doing so.