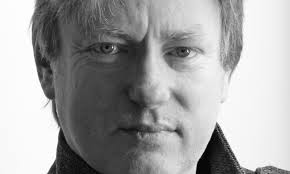 Author Michel Faber is tinged with enigma and exotica. His name sounds both European and British, with its allusion – probably fictictious – to the famous publishing house, Faber & Faber. The 54 year-old was born in the Netherlands but educated in Australia – and so could be regarded as one of our own, although he lives now in Scotland.

He completed his most recent – and supposedly last – novel while his wife died of cancer last year. Grief is one of the themes explored in The Book of Strange New Things (Canongate).

Protagonist, Peter is a Christian missionary to the Oasan people on the planet of Oasis. These people have faces like a placenta with foetuses. They have trouble pronouncing ‘t’s and ‘s’s in English and Peter translates parts of the Bible, the ‘Book of Strange New Things’, to make it more accessible. His version of Psalm 23, ‘The Lord is my shepherd …’ is a triumph for these people, avoiding incomprehensible concepts such as ‘shepherds’ and the problematic sounds: The Lord be he who care for me.

I will need no more.

He bid me lie in green land down.

He lead me by river where no one can drown.

He lead me in the path of good.

Peter fervently invests himself in the lives of the Oasans: helping in the fields as well as in their spiritual lives. To distinguish the people from each other, he calls them ‘Jesus Lover One, Two …’ and so on. When his favourite, ‘Lover Five’, is close to death he prays the simple but best prayer, ‘Dear God, please don’t let Lover Five die’, knowing that God can cure miraculously but doesn’t always choose to do so – perhaps an echo of the author’s own experience.

Meanwhile, Peter’s wife on earth, Bea, is struggling more than he is, but he deafens himself to her accounts of the ravages, natural disasters and food shortages on earth. The breakdown of society, personalised in the torture of their cat, is shocking, yet buffered by distance.

Both readers who enjoy sci fi and those who would normally avoid speculative fiction will find much to absorb in this thoughtful, original novel. I was so impressed with The Book of Strange New Things that I also read Faber’s next most recent novel, The Fire Gospel (2008). This is another fascinating, out-of-the-box narrative and follows academic Theo Griepenkerl who finds the fifth gospel, the Fire Gospel, inside the pregnant belly of a bombed Iraqi statue. He publishes this subversive story and becomes a victim of his own success. The Fire Gospel is a very readable satire, although not as profound as the exceptional, The Book of Strange New Things.