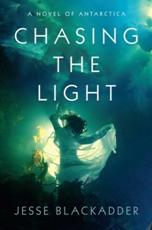 It’s the early 1930s. Antarctic open-sea whaling is booming and a territorial race for the mysterious continent between Norwegian and British–Australian interests is in full swing. This was the era when Antarctica was closed to women, in spite of hundreds applying to expeditions.

Determined to learn more about the first women to reach Antarctica, Jesse Blackadder travelled to Norway where she made the exciting discovery that the first woman to reach the Antarctica Peninsula was not an explorer but Ingrid Christensen, a 38-year-old mother who left her six children behind and travelled there on a whaling boat four times in the 1930s with her husband, taking a female friend or two on each trip.

With this intriguing fact as inspiration, Jesse tells the story of a sea voyage from Cape Town by the Norwegian whaling magnate Lars Christensen and three women: Lillemor Rachlew, who tricked her way onto the ship and will stop at nothing to be the first woman to land on Antarctica; Mathilde Wegger, a grieving widow who’s been forced to join the trip by her calculating parents-in-law; and Lars’s wife, Ingrid Christensen, who has longed to travel to Antarctica since she was a girl and has made a daunting bargain with Lars to convince him to take her.

Loyalties shift and melt and conflicts increase as they pass through the Southern Ocean and reach the whaling grounds. None of the women is prepared for the reality of meeting the whaling fleet and experiencing firsthand the brutality of the icy world.

As they head for the continent itself, the race is on for the first woman to land on Antarctica. None of them could possibly know how their arrival will change them forever.

Jesse is an award-winning short-story writer and freelance journalist, fascinated by landscapes and belonging. Her earlier novels are After the Party and The Raven’s Heart (2011). She was awarded the Guy Morrison Prize for Literary Journalism in 2012 and the Australian Antarctic Arts Fellowship in 2011/2012, which enabled her to travel there for the second time on a six-week voyage. Born in Sydney, Jesse now lives near Byron Bay.