The inaugural Stella Prize longlist was announced today, something met with much frisson (at least it was in my one-person household). The announcement has been a long time coming, both because Australian female authors have traditionally been overlooked when it comes to literary prizes and because it’s taken some time for the Stella Prize to go from indignation-inspired idea to inception.

The prize, just in case you’ve not yet heard of it, is (as the artfully designed, communication design-strong Stella Prize website helpfully tells us up front on its homepage) ‘a major new literary award for Australian women’s writing’. That’s writing by female authors, not necessarily but not excluding writing for women, often categorised and dismissed as ‘chick lit’.

‘The Stella’, as it’s no doubt known to those of us Aussies who consider it our god-given and reflexive right to colloquialise anything and everything, was named after Stella Maria Miles Franklin (AKA the author of My Brilliant Career). Its bounty is $50,000 and it’s open—hurrah, because other prizes’ either-or-ness I find frustratingly prohibitive—to works of both fiction and non-fiction.

We’ve come to the awkward bit of the blog where I must confess that I’ve read just one of the esteemed nominated titles. Romy Ash’s Floundering and Michelle de Kretser’s Questions of Travel have been on my must-buy and must-read list for a good while, but the other longlisted titles raised an I’m-out-of-the-literary-loop feelings of inadequacy in me. Most of the books I haven’t heard of; the others are probably too clever and too highbrow for me to even attempt to read.

Still, the selection reflects a diversity of titles and showcases some of Australia’s most talented female writers. It also contains a little bit of something for everybody. For what it’s worth, I can highly recommend Robin de Crespigny‘s The People Smuggler, a humanity-packed creative non-fiction telling of the preconceived notion-busting, forced-by-desperate-circumstances side to a people smuggler.

Having miraculously survived Saddam Hussein’s torturous prisons, Ali Al Jenabi (now dubbed the ‘Oskar Schindler of Asia’) had to flee Iraq. What followed was years of furtive, hand-to-mouth living, the necessary discovery of the world of fake passports and illegal border crossings and, eventually, people smuggling. The latter came about because Ali was ripped off by a people smuggler and had to find a way to both get his family to safety and to earn enough money to get them aboard a safe boat.

I blogged more in depth about the book some months back so won’t repeat its tale or my impressions of it here (you can read the blog here if you’re keen). Suffice to say, it’s comprehensive, compelling, and will turn your impression of what kind of person a people smuggler is on its head. 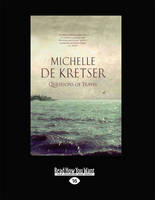 If The People Smuggler is any indication of the strength of the titles on the Stella Prize longlist, this is an excellent inaugural award-nominated field. The shortlist will be announced on Wednesday 20 March, with the award itself announced and bestowed on one of the authors on Tuesday 16 April.

*Thanks to Naomi Woodley for alerting me to the fact that the list had come out.