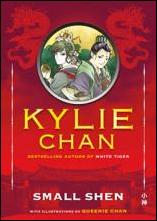 SMALL SHEN
is the amazing story of Gold — a stone spirit and a chronic troublemaker in the court of the great Gods of Chinese mythology.

A mix of Kylie Chan’s brilliant storytelling and Queenie Chan’s beautiful illustrations, SMALL SHEN is a fantastic treat for fans of WHITE TIGER. Readers will be thrilled to discover the events leading up to John Chen and Emma Donahoe’s story in this wonderful prequel told in a unique mix of manga-style illustration and traditional prose. The story follows Gold’s escapades throughout history, including seducing a dragon princess, attempting to steal one of the Tiger’s wives, making bets with demons, and working for the Blue Dragon of the East.

SMALL SHEN is a collectible piece of art for fans of Kylie Chan to treasure, but also a fantastic introduction to the gripping WHITE TIGER series.

Kylie was born and raised in a typical Australian family, yet it was her marriage to a Hong Kong national that has had the largest influence on her writing career. Twenty years ago, she was married in a traditional Chinese wedding ceremony in Eastern China, and spent the following years immersing herself in Chinese culture and mythology.

Now living in Brisbane, she is a mother of two and the bestselling author of the Dark Heavens and Journey to Wudang trilogies.

Queenie was born in Hong Kong in 1980, and migrated to Australia when she was six years old. She is a manga illustrator who has collaborated with Dean Koontz on his New York Times bestselling ODD THOMAS series of graphic novels.