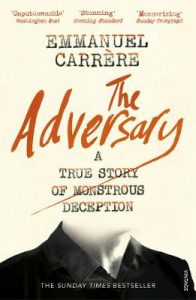 Trigger warning: The book this blog features is contains distressing subject matter, so may not be suitable for all readers.

About two years ago, I had the misfortune to be very, very peripherally affected by the real-life playing out of a most bat-insane story—one that involved a guy I vaguely knew having spent 15 years pretending to study medicine and practise as a doctor.

Without going into details—in part because the story’s so bizarre that I could not do it justice and in part because I don’t think it’s my story to tell—what I will say is that I and everyone else who knows the story has spent the better part of the past two years grappling with the ins and outs of it and basically going: What the hell?

So I was online and ordering The Adversary: A True Story of Monstrous Deception quick sticks after a friend recommended it. The story, which is of a man who spent 18 years pretending to study medicine and practise as a doctor before murdering his wife, their two children, and his parents, as well as attempting to murder his mistress, was notorious in France but largely passed me by in Australia. Until now.

While I don’t for a moment suggest the two tales have much in common other than faking medical careers, I was keen to see if someone else had been able to resolve the questions that remain unresolved (or even unanswered) in my own life: What prompts someone to fake doctory? And how on earth do they manage the logistics?

The how and the why clearly drive the book, as author Emmanuel Carrere parallels aspects of his own life with Jean-Claude Romand’s, at least in part to try to compare and contrast and ultimately understand Romand’s actions. For instance, the book’s opening paragraph reads startlingly matter-of-factly:

On the Saturday morning of January 9, 1993, while Jean-Claude Romand was killing his wife and children, I was with mine in a parent–teacher meeting at the school attended by Gabriel, our eldest son. Then we went to have lunch with my parents, as Jean-Claude Romand did with his, whom he killed after their meal …

Reading this book was more than a little eerie, as what may seem like an objectively interesting tale felt for me like deja vous as Carrere steps readers through the reaction to finding out that nothing about Romand was as it appeared:

Everyone was wondering: How could we have lived beside this man for so long without suspecting a thing? Everyone tried to remember a moment when some suspicion, some moment that might have led to some suspicion, had almost crossed their minds.

Romand’s life was ultimately a house of cards, but it seems no one had had their suspicions raised sufficiently to warrant investigating: Romand claimed he worked at the World Health Organization, but a simple phone call after the murders revealed there was no such person employed there. Romand wasn’t listed on the global list of physicians and had never graduated medical school, and so on, and so on—the details, once finally investigated, didn’t hold up.

While I was hooked enough to look forward to reading snippets of The Adversary before going to bed, I felt rising sadness as I approached its end. Carrere’s short tale is undeniably absorbing—so much so it was named a New York Times ‘Notable Book’)—but ultimately reflects my own frustrating findings: No one can truly know anyone else, and the kind of person who will fake being a doctor for decades is arguably not someone of whom you can make sense.

So while I was disappointed that the book wasn’t able to provide the answers I was after, I did really appreciate that it gave us some. At the very least, I got a sense of the logistics of maintaining and funding such a lie for so long. And I got a fuller sense of a man who could too easily be painted as two-dimensionally evil.

Whether you were or weren’t familiar with the 1993 murders, The Adversary is a fascinating read. At a mere 191 pages of easy-to-digest writing, it’s the kind of book you can quickly finish but that will remain front of mind for some time.