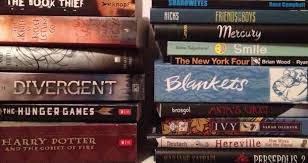 According to teen author, Charmaine Clancy there are a few issues that rate more highly than others for teen readers of YA fiction. These include problems dealing with: sexuality, freedom, relationships and friendships, social power, anger, fear, risk taking, social responsibility and bullying, to name a few.

The following YA titles represent modern day takes on common reoccurring teenage dilemmas, ticking at least one or more of these boxes. They are all highly recommended reads for young people plummeting into puberty and new belief systems as they navigate the next course of their lives. All riveting, well-crafted stories that will leave your nerves tingling, your heartbeat racing, and your tears well and truly jerked. Enjoy! I ripped through this one like a dog on steroids at an agility trial. Terrific. Gutsy, three-dimensional characters displaying equal parts humility, vulnerability, and bravado while tossing around some cracker one-liners people this teenage angst-y tale about losing and finding.

Kat Jones is left exposed and violated after an intruder invades her home. Feeling alone and isolated after the earlier death of her mother, she must rely on her despised next-door neighbour, Edwina, and Hercules, Edwina’s ugly canine companion to overcome her current dread and face her former demons. Fortunately mutt love and new bloke on the block, Al all help to rebuild Kat’s fragile lines of defence.

Christine Bongers writes with dramatic heart and unabashed confidence. Her reference to devils-on-horseback was a marvellous slingshot back into the 70s for me too. Great that teens can be entertained and educated in one fell swoop of the pen. A pure pleasure to read. Teenage somethings will suck this up. 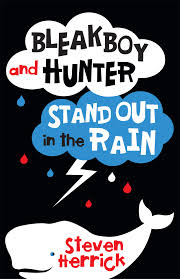 Bleakboy and Hunter Stand Out in the Rain by Steven Herrick

Eleven year-old Jessie is a boy with seemingly insurmountable problems not least of which is accommodating his square-fit self into the round-fit ideals of his communal-based school and community. Local bully, Hunter complicates the mix further until enterprising, Kate rallies with Jessie to ‘Save the Whales’ and inadvertently, Jessie’s sense of humanity and place.

Delightfully, Hunter proves that even the most malignly misunderstood antagonists can be real modern day heroes when ‘some things are too big for (one) boy to solve’ alone.

The conclusion was a little soft and spongy however, a sense of optimism as sweet as bubble bath fug hung about long after the end. Slightly eccentric, more than a little funny, warm, tender, and witty. The back cover blurb does not do this story justice; it meandered on a bit but I don’t think that will stop upper primary aged boys and girls thoroughly enjoying this sometimes acerbic, mostly uplifting read. I certainly did. This is the fourth book in the immensely popular Shiver series. I can’t comment on the first three having dived into this instalment without preamble or past research, but found it stood proud and solid on its own and at no point whatsoever did I experience any confusion or wonder what had taken place previously in the lives of main protagonists, Cole St Clair and his love interest, Isabel. Like the storyline itself, they and the characters surrounding them are crafted with stinging conviction.

Cole has a secret that only a select few are privy to. He is the epitome of a genius, self-abusing, addictive personality, overachieving rock star whose Achilles heel is Isabel, a girl with a macadamia tough exterior he is desperate to crack. How Cole sheds his former demons and absolves his misdeeds with the help and hindrance of those he meets under the surreal light of California is page-turning material.

Stiefvater masterfully tells Coles and Isabel’s story in a raw and powerful way that often leaves you chuckling at their darkest hours. Thrilling stuff for older teens. State of Grace by Hilary Badger

‘A utopian rose in a bed of dystopian thorns’ is a fairly accurate description of Hilary Badger’s (aka H.I. Larry of the bestselling Zac Power series) first venture in YA fiction. From the first sentence, an unsettled, creepy air descends upon the reader beautifully obscured by a veil of lush garden-of-Eden idealism. Since her creation, Wren has lived an idyllic life in a perfect paradise with life-loving companions and a deity like no other to worship, Dot.

However, not all is as ‘dotly’ as it seems (per the local non-negative lingo of the inhabitants of Dot’s Paradise). When cracks begin to appear in Wren’s memories and belief system, she and fellow creation, Blaze must decide whether to confront their horrid pasts or succumb to an unreal future.

A disturbing and illuminating combination of our not too distant future lives that rests lightly on friendship, authoritarianism, blind faith, and facing truths. There are zillions of twists, some no bigger or harder to appreciate than a butterfly but most are comfortably homed in a solidly built world thanks to Badger’s bright imagination. 14 + year olds will enjoy the mystifying experience A State of Grace provides.