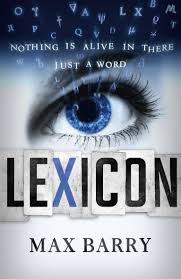 This is an incredible read. It starts at breakneck speed and you have to keep up. No, you WANT to keep up. Max Barry introduces us to a shadow world. A world where a select group of people have honed the power of words. They are “Poets” and they can influence and manipulate people based on their personality type. They recruit those that have a gift with words and they are sent to study at an elite and exclusive school where they study all aspects of language and its power.

But one of these “Poets” has discovered an ancient word. A word that has destroyed different civilisations for thousands of years. The word has wiped out the town of Broken Hill. One single word and three thousand people are dead.

Nothing is alive in there
Just a word

No one escaped and no one can return, except for one man. One man who is seemingly immune to words. This makes him very special and very dangerous, only he can’t remember a thing.

There is so much to love about this book. The world Max Barry creates is intriguing, addictive and uber-clever. I found myself rationing the book because I didn’t want it to end. Barry uses the story’s structure perfectly. Sucking you in at just the right moments before spinning you around and showing you another side to the story. Even when you think you’ve got it figured out he cleverly spins you round again. Barry also combines the history and philosophy of human language with its modern-day applications to create a conspiracy theory that will blow your mind.

If you love reading, if you love the power of words, this is the book for you. 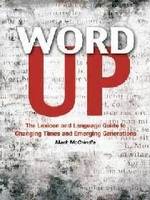 As a Gen Y myself, I never quite understood adults’ alternating bemusement and frustration at our constantly evolving language use. I may have even rolled my eyes once or twice during my awkward teenage years when, in an attempt to show they were down with the lingo and could totally relate to me on my terms, my parents threw the term ‘dude’ into a sentence when ‘dude’ was, like, so passé.

But I’m fast entering my parents’ world of combined and constant bemusement and puzzlement as I ‘grow up’. The generations behind me are now bandying around terms in contexts that I truly don’t understand. That’s even occurring within my own generation, with a friend and fellow Gen Y recently dating another Gen Y who was about four years younger.

That’s not an entirely giant age difference, you wouldn’t think. But clearly something’s happened to language and language use in those four years with my worldly, witty friend completely unable to decipher his younger girlfriend’s text messages.

He handed the phone over to me in exasperation one night and asked me if I could make out what she was trying to tell him. I knew it was English, but it was—without exaggeration—utterly foreign and utterly unintelligible.

I think he ended up calling her—something our parents used to do to us and that we used to be annoyed by, thinking ‘I already told you this in the text message’. Meanwhile I debated internally whether I was getting old or whether technology and language were evolving so fast that even a year or four’s birth difference could result in writing and speaking so completely differently. 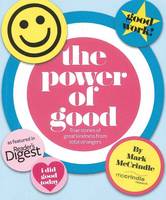 Unsurprisingly, and without borrowing clichés about communication breakdown, my friend’s relationship didn’t work out. But what’s remained with me has been an ongoing fascination with language origins and evolution.

Social researcher Mark McCrindle and his co-writer Emily Wolfinger have tackled just this in their latest book, Word Up. The book’s an updated and expanded version of a guide McCrindle wrote a few years back on how to communicate with Gen Ys—something that proved popular and well-thumbed and regularly requested.

I’m impressed by the book, both as a writer and as a Gen Y. It’s not flashy in terms of expensive, glossy, colour images, but it’s aesthetically pleasing, well laid out, and strong on communication design. Themes and chapters are organised logically, and tables are used to good effect to break down, group, compare, and communicate key concepts.

For example, two of the first tables we encounter outline each generation’s key information and influences, which include the prime ministers, celebrities, historical figures, and scientific breakthroughs to which they’d have been exposed.

Another table outlines newly formed words based on celebrity couplings, such as ‘Brangelina’, ‘TomKat’, or ‘Bennifer’, while yet another provides explanations of text- or chat-room acronyms/initialisms.

Thankfully, though, this book examines different generations’ lingo without making it seem twee and, well, a bit kids-these-days patronising. Instead it meshes quantitative and qualitative research with concise, accessible language, and a sense of humour. It also shows that, far from being parrots of Americanisms, we Australians pick and choose the terms we wish to adopt.

There are sections that include the most memorable jingles (think ‘Happy Little Vegemite’, ‘Louie the Fly’, and ‘My Dad Picks the Fruit’) and one-liners (think ‘Tell him he’s dreamin’’ and ‘That’s not a knife, this is a knife’), which are fantastic memory-triggering trivia and that I bet, having just been reminded of them, are still playing out in your head.

The sections that will perhaps prove most useful, though, will be the Glossary and Youth Language Lexicon at the back, which include such terms as:

I don’t get ‘swag’, something that I’ve encountered in recent times. I don’t think I ever will. But I do get that language is rapidly changing and that there are some fascinating terms out there (like ‘fruit ninja’ and ‘hulked out’, which I heard in common usage just today), some of which I am determined to adopt. Word Up is available now.

One of my deepest, darkest secret shames has to be that I am completely, utterly, and embarrassingly bad at Scrabble. So bad, in fact, that it actually makes me angry.

Sure, Scrabble’s a board game and is (apparently) fun. But the latent, almost physical frustration I feel at not being able to mentally manoeuvre single blocks of letters into witty, wise, or obscure words that are proved right by the dictionary (much to my opponents’ surly indignation) gives me the absolutely willies.

I’m not sure why I’m so rubbish at Scrabble. If I had to hazard a guess, it would be that I was born without that spatial thingy that would give me the ability to first visualise and assemble word possibilities from the letters before me in my little, upstanding tray, and second, to see a spot where those word and letter possibilities can fit in with those already laid down on the board. I also doubt either is helped by the brain-freezing, weight-of-expectation anxiety that even thinking about playing brings upon me.

The frustration at not having/being able to do whatever this game requires of me is compounded by the fact that being a writer and editor and all means that everyone a) expects me to be completely kick-ass at it and b) wants to beat me.

I’d say it’s a pretty hollow victory for them when my opponents realise their apparent Goliath of an opponent is a whimpering ninny. Case in point: my friend Tahnee put down ‘bristle’ on her very first go last time we played. She earned herself something like a triple word score for her savvy placement plus 100 bonus points for using up all her letters. Suffice to say, I never even came close to competing.

For most people, though, they’ll never get a chance to find out, because after too many games of voluminous embarrassment and frustration that I know is irrational and juvenile but that sees me get so frickin’ angry that I want to fling the board and letters across the room and throw myself on the floor in a full-blown adult tanty, I now refuse to play. At all. Ever. So please stop asking me.

The latest incarnation is apparently Words With Friends, a seemingly innocuous-sounding, potentially copyright-infringement-avoiding name for what is, for all intents and purposes, a version of Scrabble. Please see above paragraph re: I refuse to play. At all. Ever. Please stop asking me.

Also while I’m getting my grump on, please stop sending me the Crikey article that heralds the news that the official Collins Scrabble dictionary has added almost 3000—yes, folks, 3000—new words to its almost a quarter of a million existing permissible words. This means 3000 new words that are guaranteed to outrage your opposition, who’ll argue that you can’t have them and then have to eat their words when you prove to them that they are, in fact, in the dictionary.

While I love the idea of these additions—you would think that the availability of more words would ease my anxiety—the reality of it makes no difference to me. It’s not that I don’t have enough word combination possibilities; it’s that I have too many. My brain seizes up and freezes up or attempts to put down words for which I’m missing one crucial letter or for which there’s no actual space on the board. That or I simply can’t see visualise the word to begin with.

What I will leave you with, though, just in case you’re a keen Scrabble player, is a selection of the newly acceptable words and their point values. Methinks there’ll be some chagrin from old-school Scrabble players who think this is lowering the tone and literacy levels. Me? I think these words are kind of funny: