I’m not big on wind. Of all the meteorological marvels on offer, it’s the least appealing to me, perhaps because I endured a few too many tropical cyclones and missing roofs as a child. 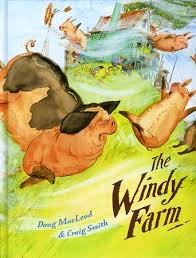 So when The Windy Farm blew onto my shelves, I instinctively hunched my shoulders and wondered what on earth could be so appealing about the latest offering by well-liked picture book team, Doug MacLeod and Craig Smith. Turns out a whole Beaufort Scales worth.

Our plucky young narrator lives with her family on the windiest farm on Windy Hill because it’s all they can afford. Their home is buffeted and bullied by incessant katabatic winds. The kind of wind that permanently bends trees into weird angles; the kind powerful enough to blow away young pigs and little girls. No one is safe from its force, no one except Grandpa who, as the illustrations subtly suggest, is so immense and heavy that he will never budge just like his favourite pig, Big Betty.

The family survive undeterred and, as is often the case, necessity becomes the mother of invention. And indeed this is the case; Mum cannily invents heavy metal shoes to anchor them all to the ground. However, in spite of their best efforts, one day they lose half their home to nature’s tempest.

Rich Uncle Jeff is no help, pointedly refusing to lend them any of his oil-amassed fortune to help fix the house. They resort to good old fashioned ingenuity and Grandpa’s power tools instead but the ensuing crippling power bill plunges them into despair (who hasn’t felt like this after receiving their electricity bill?) Not easily defeated, Mum comes up with a wily plan; to convert the farm into a sustainable wind farm. Pretty soon things are on the up and up. The farm road is paved in tarmac and truckloads of money from all the electricity they’ve enterprisingly ‘farmed’. Big Betty, the prized pig, returns to a wind-proof sty (she was sold to pay the electricity bills) and although the need to wear heavy metal boots remains, their money worries have been swept away, just like Uncle Jeff who ‘became poor’ after the ill winds of fate blew his way. ‘Never mind,’ Grandpa sanguinely observes; no one really liked him anyway.

Doug MacLeod’s contemporary message about the power of wind and its significance in environmental sustainability drifts delightfully zephyr-like throughout this picture book. Told in a concise, witty style, The Windy Farm exposes young readers to a range of fascinating topics including the harnessing of energy, inventions, problem-solving, sustainability and endurance. 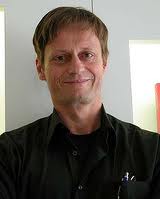 No stranger to children’s book illustrating, Craig Smith’s flamboyant, comic-book style pictures and characters are hysterical; from the very top of Windy Hill all the way down to the chooks’ little metal boots. He uses heavier gauche paint to create a deeply detailed yet fluid almost dreamy visual effect that sweeps from page to page. Movement (of the omnipresent wind), is represented magnificently with the use of acrylics. One can see and feel the air swirling through each scene. I found it astounding even though I’m not that big on wind. Smith and MacLeod include lots of witty references to the use of nuclear power and the need to adopt a clean energy philosophy if we are to enjoy a longer, better existence than poor old Uncle Jeff.

The Windy Farm is not however a heavy prescriptive lesson in world conservation. Rather, it is a light-hearted, fanciful look at ingenuity and tenacity in their purest and funniest forms. My Miss 7 just thinks it’s very cool. Well it would be with all that wind about wouldn’t it?

Breezy, good fun, imaginative with plenty of room for thought. Plus 5s will love it even if they are not big on wind (but most are).