Amnesia fiction generally contains a character suffering from some form of memory loss, or memory loss forms part of the storyline. It’s such a common plot device I thought it was worth exploring. Here are seven amnesia fiction novels you might enjoy.

We Were Liars by E. Lockhart We Were Liars is about a group of four friends who called themselves The Liars. Cady (Cadence), Mirren, Johnny and Gat are best friends and they spend every summer holidaying on a private island off the coast of Massachusetts. During Cady’s fifteenth summer she suffers a traumatic brain injury but unfortunately she can’t remember what happened. Two years later she returns to the island in an attempt to try and remember what happened.

We Were Liars is full of mystery, secrets, lies and a twist at the end.

Before I Go to Sleep by S.J. Watson 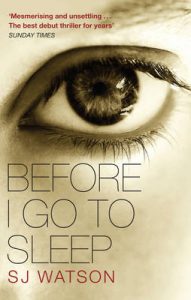 Every time Christine goes to sleep she loses all of her memories. A consequence of a traumatic brain injury years earlier, her brain erases everything overnight and when she wakes, she has no idea who she is.  Christine must find out what happened but soon learns she can’t trust anybody.

Before I Go to Sleep is now a film starring Nicole Kidman and Colin Firth.

The Girl on the Train by Paula Hawkins Rachel catches the same train into London each day and enjoys imagining the lives of those living in the houses she travels past. The train waits at the same signal light each day and she pays particular attention to one of the houses. One day Rachel sees something that will set an entire chain of events rolling as she inserts herself into the lives of those she’s been watching.

Rachel is an alcoholic and her memory is patchy as a result of black outs and alcohol abuse. This makes her an unreliable narrator. Or does it? Amnesia in fiction isn’t always attributed to an accident, injury or trauma. In Still Alice by Lisa Genova, the protagonist Alice is fifty years old and a cognitive psychology professor at Harvard. She’s an expert in linguistics, married with three adult children and learning to deal with early onset Alzheimer’s disease.

Still Alice is about family dynamics and the sense of self. It’s also been adapted to the big screen starring Julianne Moore as Alice.

The Maze Runner by James Dashner When Thomas arrives on a lift surrounded by a gang of boys, all he can remember is his name. He finds himself in a walled glade which forms part of a mysterious yet brutal stone maze. Thomas doesn’t want to settle down to life in the glade and insists on searching the maze.

Prepared to risk his life to escape the maze, what Thomas finds will irrevocably change the lives of everyone in the glade.

What Alice Forgot by Liane Moriarty 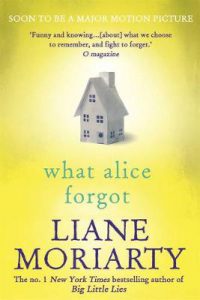 Alice ‘comes to’ in a gym, and instead of being 29 and pregnant with her first child, she finds 10 years have passed. She’s now 39 years old with three kids and in the middle of a divorce. She also has a strained relationship with her sister.

Alice tries to work out what happened to her life. How did her life become like this and how did she lose 10 years of her life?

The Bourne Identity by Robert Ludlum 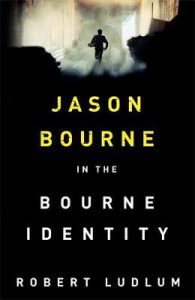 First in a series, the star of The Bourne Identity is Jason Bourne who hardly needs an introduction. Played by Matt Damon in the movie franchise, Jason suffers from amnesia and can’t remember his former life. Was he an assassin? Why are people trying to kill him? This is a thrilling action-packed series following Jason’s journey to the truth about himself.

Do you enjoy amnesia fiction? Have you read any of these books? If you have others you’d like to recommend, please let me know in the comments below.