Whenever I pick up a Jon Klassen book it seems to have that super-power magic that thrusts it into classic-dom. So delectably simple yet surreptitiously clever and charmingly funny, it’s no wonder they are so well-loved around the world. The author-illustrator is the legendary creator of winning books including I Want My Hat Back, This is Not My Hat, and Sam and Dave Dig a Hole (Mac Barnett). Today we’ll explore the third instalment in the ‘hat’ series, We Found a Hat, and a newbie with supreme author Mac Barnett; Triangle. 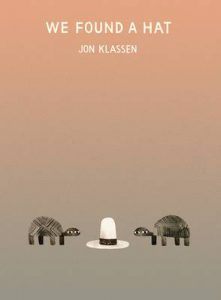 We Found a Hat carries on the saga with hats brilliantly, this time featuring two principled turtles…and a hat. When stumbling across this abandoned item in the middle of the desert, the high-top headpiece soon becomes the turtles’ object of great desire. However, as there is only one hat, they agree to leave it alone. But for one turtle, the temptation of his new obsession is overbearing and he attempts a sneaky act of pilferage whilst his companion sleeps. Morality and loyalty surface when he hears of the marvellous dream with both turtles enjoying their fortune. 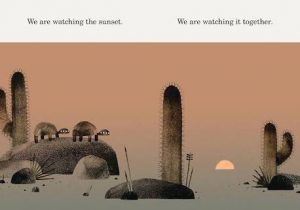 I love that this story is played out in Parts, giving it a movie-quality feel. So clever! Klassen’s ingenuity also strongly emanates through the use of simple narrative and monochromatic, modest images that both say so much. The unspoken words captured through the eyes of the devilish turtle brilliantly evoke humour and clarity into his thoughts. The sparseness and the speckles of the scene beautifully portray the given landscape and the underlying notion of keeping life free of complication.

We Found a Hat certainly explores some complex facets of behaviour, such as enticement and immediate gratification despite ethics, as well as aspects of trust, communication and compassion that are important in relationships. Yet its beauty lies in its simplicity, wit and charm, sure to allure readers of any age many times over. With their wry sense of humour, rich messages and unsurpassed storytelling talents, Mac Barnett and Jon Klassen enlighten us with the first in a new trilogy and more sneaky characters; it’s Triangle.

This board book style picture book with its stand-alone, wide-eyed triangle on the cover is just sublime. Again, with Klassen’s mesmerisingly textured watercolours in earthy tones and unpretentious landscapes we are immediately drawn in to the action of each scene. Barnett’s narrative is straightforward, perfectly paced and inviting, enrapturing his audience with curiosity, excitement and absolute delight. 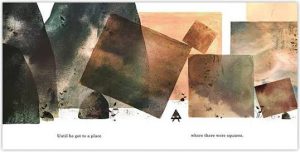 Triangle leaves his triangle house with one naughty plan in mind – he is off to play a sneaky trick on Square. His path through a shape-laden environment leads him to Square’s door, where he plays his cruel, snake-impersonating trick. When Square uncovers Triangle’s mean joke, he intends on revenge and chases him back through the shapes and to Triangle’s door. But what happens next comes an unexpected justice for both parties. You get what you deserve!

Stunningly captivating. Brilliantly played-out comedy. Triangle shows us exactly the result of a poorly thought-out and mischievous prank. Including themes of trust and social discrepancies, young readers are also pleasured with the exploration of shape and size, and the playfulness that is childhood. ‘Tri’-mendous fun for kids from age three. Out soon! 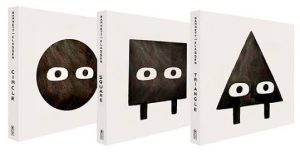