In just a couple of days we commemorate the legacy of the brave soldiers and the tragic events of World War 1 that occurred one hundred years ago. A beautiful selection of ANZAC books for children have been reviewed by Dimity here, but here’s a few more that certainly captured my heart with their touching themes of heroism, love and dedication. Gorgeous in its lyrical prose. Devastatingly provocative. Stunning imagery. ‘Once a Shepherd’ is a war story of love and loss, sure to break its readers’ hearts.
It tells of a young shepherd, living amongst a backdrop of emerald green beauty. “Once Tom’s world was all at peace.” He marries his sweetheart, and all the world seems right. Until he is called to war and he bids farewell to his wife and unborn child. A stranger veteran calls upon Tom’s home once the war had ended, only to share the shattering news of his heroic fall with a now grieving widow. Of the hand-stitched coat she once darned, now a new toy lamb is mended for Tom Shepherd’s baby boy. And the world is at peace once again.
‘Once a Shepherd’, with its carefully crafted verse and exquisite watercolour images of greens and browns, is a powerful, moving tale of the heartbreaking reality of war and the inherent hope for peace.
Prized Notable Picture Book of the Year in the Children’s Book Council of Australia’s 2015 Awards. A foal born at midnight; black as coal, eyes glimmering in the moonlight. She is Midnight, the Australian Light Horse trained by Lieutenant Guy Haydon and gracious in her charge in the last great cavalry.
The first port of call for the soldiers is four months in the trenches at Gallipoli without their horses. Reuniting once again in Cairo, the relationship is further bonded as the pair endure the harsh conditions of the heat, scarce water supply and flying shrapnel. But still, soldier and mare commit to their duties, and to one another. In a devasting final battalion (Beersheba, August 1917), riders tumble and horses fall. Guy and Midnight are both struck; a heartbreaking yet poignant moment as the pair share their last breath side by side.
The succinctness of the text reads almost poetically, and the continual references to the affectionate bond between Guy and his beloved Midnight make this war story more of a tender account of their time on the battlefield. The gouache illustrations by Frané Lessac compliment Greenwood’s evocative words and capture the starkness of each war scene.
With notes referencing background information on the Light Horse and the details of Beersheba, ‘Midnight’ makes for a terrific resource for studying the war, as well being as a heartrending tale of love and dedication. This book is probably my favourite of the Anzac stories. ‘Anzac Biscuits’ poses a lovely contrast between a child’s warm and safe home, and her father battling the cold and dangerous conditions out in the trenches.
Rachel and her mother spend time together baking Anzac biscuits. As pots and pans bang and crash to the floor, the soldier lays low as shots bang around him. As Rachel sprinkles oats like snowflakes, the soldier turns his back to the bitter cold. The little girl loves the smell of burning red gum in her stove, but the soldier will never forget the choking gun smoke drifting across the fields. Despite the treachery that the soldier has faced, we are given a heartwarming ending we can cherish; the soldier – Rachel’s father – loved the biscuits made just for him.
An endearing story of affection, commitment and sacrifice, with equally warm and gentle illustrations, ‘Anzac Biscuits’ is a beautiful way to introduce the topic of wartime to young children. They will also find little clues in the pictures upon revisiting the book, which make for wonderful discussions about what life was like for both the soldiers and their families at home (and the significance of anzac biscuits).
Prized Notable Picture Book of the Year in the Children’s Book Council of Australia’s 2014 Awards. The words versing the iconic song about the Vietnam War, ‘I Was Only Nineteen’ tells of the devasting loss, sacrifice and emotional impact an elderly man is reliving of his time as a teenager at war.
We travel with this veteran from the moment he set sail, to inhabiting a firey, orange scrub, battling for hours and weeks amongst bullets and grenades and watching mates hit by the blasts. No-one told him about the mud, blood, tears, rashes and chills that would haunt him until he was old.
These memories of the war, through these unforgettable words, have been beautifully illustrated by Craig Smith, rendering warmth and respecting the spirit of our soldiers – the fallen and the survivors. I love the clever connection between the past recount and the present with a touch of army green evident in each scene showing the veteran and his grandson.
‘I Was Only Nineteen’ is a poignant rendition of a groundbreaking song by John Schumann, with great historical significance and plenty of scope for wartime study.
Prized Notable Picture Book of the Year in the Children’s Book Council of Australia’s 2015 Awards.

This year marks the 100th anniversary of the Gallipoli landing. For this significant Anzac Centenary, a myriad of children’s books have been released to teach our young ones about the physical, emotional and historical impact of war, and to celebrate our war veterans; our heroes. One such picture book that does just that is ‘The Last Anzac’, written by Gordon Winch and illustrated by Harriet Bailey. And this one is certainly special. It is based on the real life experience of a young boy’s meeting with Alec Campbell in 2001, who served in Gallipoli in 1915. Having being enlisted at the tender age of 16, at the time of the interview Alec was the last living Anzac at the ripe age of 102. Amazing! Endpapers with original letters, photos and stamped envelopes set the scene for the historical journey we are about to encounter. Alternating between past and present, we are told of the day that the young boy, James, and his father stepped off the plane in Tasmania to visit and interview the last Anzac, Alec Campbell.
He, too, was young and small, nicknamed ‘The Kid’ at the time of the Great War (1914 – 1918). Alec was a noble and brave teenager, having endured treacherous experiences in Anzac Cove. In comparison, whilst in the comfort of Alec’s present home, James nibbles on biscuits as he asks the veteran questions about his responsibilities, fears, safety, living conditions and health during the war.

The story retells Alec’s six weeks worth of dodging bombs and escaping firing gun bullets, eating tinned bully beef and hard biscuits, and the celebratory treat of oranges when leaving Gallipoli. An image of young and old hands touching war medals portrays the sheer dedication of this man in his short service, but also a reminder for children (and adults) to respect and honour all the soldiers who fought for our country long before they were born.
Alec was sent back to Australia after suddenly falling ill; now a Gallipoli veteran – at the age of seventeen. As boy and veteran bid farewell, it is this serendipitous moment that James realises he is in the presence of a true hero.
(Alec lived to the age of 103, passing the year after James’ interview.) 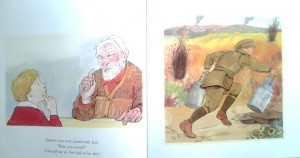 Having had done extensive research on the subject, New Zealander, Harriet Bailey has illustrated this book with precision and sensitivity; appropriate for the given era. There are enough details to depict the harshness and trepidity of the wartime, but without any graphic or shocking images. The same is felt about the gentle nature of Gordon Winch’s text; the story provides basic information that is suitable for younger children to understand and digest. The juxtaposition between the 1915 retelling and the 2001 meeting is cleverly highlighted in the pictures with bold, earthy tones of khaki and burnt orange for the past, and softer, pastille shades for the present.

‘The Last Anzac’ is a beautifully written true account of this exceptional and humble soldier, Alec Campbell during World War 1. Its non-confronting and meaningful approach, and significant historical value make this resource engaging and suitable for early primary students.
Teaching notes are available at http://www.newfrontier.com.au/depot/item/898-20150317102244-The-Last-Anzac.pdf