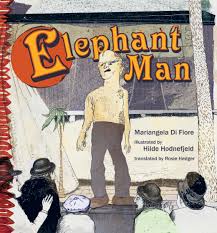 The old proverb ‘you can’t judge a book by its cover’ is a mantra often touted but sadly, sometimes forgotten in our instantaneous summarising of a person’s character based on their outward appearance. In spite of our best efforts to ignore the extraordinary and bypass the bizarre, unusual can equate to different which can persuade us to believe it as being wrong which means we are liable to overlook the true beauty of a thing or personality of a person. Here (across two reviews) are two picture books that I believe will help young children see beyond the ‘covers’ of difference and discover a deeper greater understanding of what dwells within.

I first learned of Joseph Merrick aka the Elephant Man in my early teens thanks to the 1980 movie release dramatizing this man’s short life during the late 1800s. I remember with indelible clarity the poignant ending and cruel indignities portrayed so effectively in black and white, but confess I never sought out written information about the man behind the mask. Life moved on as it does, till now. 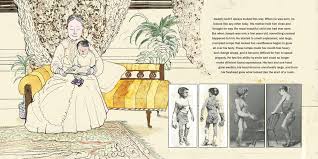 The picture book, Elephant Man is the first time Merrick’s story has been told with children in mind. Firstly, it blows current 400-words-or-less picture book constraints out of the water. Di Fiore is deliberately unrushed and methodical in her telling of Merrick’s story from the time of his birth, when he looked ‘like any other baby’ to his rapid physical corruption, possibly caused from Proteus syndrome and the disease called neurofibromatosis type 1.

Mid-primary readers will easily handle this account thanks to the inclusion of beseeching dialogue and Merrick’s fictionalised internal thought. There is a satisfying balance of story interwoven with fact and intimate events. By the final ‘reveal’, we have endured the pain and humiliation as Joseph did as well as being heartened by his tremendous sense of self-regard despite his dispiriting existence. 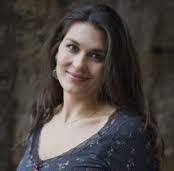 Di Fiore’s compassionate narrative aligns effortlessly with Hodnejeld’s mesmerising illustrations, describing Joseph’s devastating loss of his mother as a wee lad, his alienating deformities, his surrender to life as a spectacle and his eventual salvation by the kind doctor, Frederick Treves.

Hodnefjeld’s artwork is heart stopping. Combining illustration, and photographic montage it gives readers tantalising glimpses into real Victorian London, including the London Hospital where Joseph resided until his death. 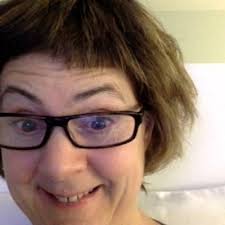 This is a true story both confronting and liberating. It is moving and memorable. It bares the worst and best of humanity without sacrificing dignity. Above all, it demonstrates the strength of will, that once uncovered can make love accessible to anyone, no matter whom or what they are – or what they look like.

I read this to my 10 year-old who insisted I complete it in one sitting. I could see the profound effect it had on her from the look on her face as she assimilated something almost unimaginable. She commented repeatedly afterwards on Joseph’s plight, trying to come to grips with the way he was treated, the way he looked and most touchingly, how he must have felt. ‘That poor man…’

‘Gather round – prepare to be amaze! You simply won’t believe it’. Elephant Man is neither gruesome nor frightening, rather simply beautiful and so very very relevant. I entreat you to share it.

Stick around for Part 2 of Finding the Love within when we go a little crazy with, Annabel’s Dance.