Breaking out the travel guide  is a great way to pass the time plotting and planning your dream vacation until you’re actually there. But many guidebooks either assume that readers are either wealthy beyond belief or willing to walk ten miles to save 20 cents on dinner; it’s all 5 star hotels at one end and sleeping on mud floors at the other. Where are the guides for those of us who like the middle road of boutique hotels and local style secrets and a little luxury at a reasonable price?

That’s where the Holiday Goddess Handbag Guide to Paris, New York, London and Rome comes in – if you are visiting one of those cities, obviously enough. This compact guide contains the combined wisdom of a whole group of holiday goddesses who have been there, done that and  found the 75% off sale while they were there. It started life as the diary of editor Jessica Adams who passed it around to pick up advice from those who make traveling with style their business; Vogue contributors, Lonely Planet writers, novelists and more.

After a year of traveling through handbags in Melbourne, London and Paris, the Holiday Goddess Handbag Guide to Paris, New York, London and Rome was filled with hard-won tips and secrets; where to stay chicly but cheaply in some of the world’s most expensive cities, how to find the best cocktails, the vintage markets, the best local brands. As being full of information it’s a visual treat; packaged in red linen and filled with gorgeous and iconic illustrations. That cute cover has a practical side too; the guide can take a beating in your bag and still look good when you pull it out later.

I caught up with Jessica to ask her a few questions about the book, the cities in it and, of course, handbags. 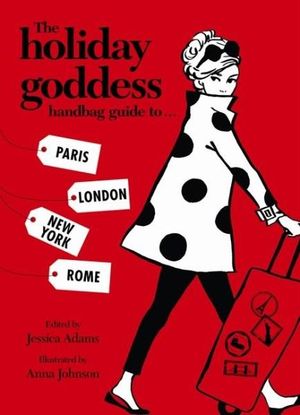 Q. What was the most surprising tip you received? And the most useful?

A. The most surprising tip we received about travel, was to volunteer at an animal charity (like the RSPCA) because the best house-sitting opportunities involve animal care, and owners feel reassured if their pets are in the hands of women who can prove they’re experienced with cats and dogs. The most useful tip we received about Paris, London, New York and Rome was this – always go in winter – cheap seats, often two-three seats to yourself on the plane and far smaller queues at major attractions.)

Q. The Holiday Goddess reviews Paris, London, New York and Rome – if there were to be Southern Hemisphere edition, what cities do you think would be in the running?

A. I’d personally like to cover every Australian capital city, and also some female traveller favourites, like Byron Bay and the Blue Mountains. I’m sure the other editors would have some fascinating ideas, though, as many of them live from Perth through to Melbourne.

Q. I’m going to have to ask – what sort of handbag do you yearn to put your copy of the guide in, and what other items are indispensable to holiday goddesses?

A. My favourite handbag of all time is a vintage Hermes Kelly. If I find that at a charity shop in London any time soon, I’ll let you know! Holiday Goddess editors find their notepads (paper not computer) indispensable, and illustrator Anna Johnson and I have a lot of them. Scribbling and sketching is the new black!

Q. The book itself is packaged in red linen and contains some amazing illustrations – in this age of the iPad, what made you decide on old world chic and a book?

A. After three years of being exclusively electronic and online, Holiday Goddess editors longed for paper and linen! But we are exploring apps for the iPad too. Holiday Goddess is three years old on November 28th and as so many of the people involved were authors or book editors, we had always secretly hoped it would turn into a book.

The book also has an online aspect at holidaygoddess.com where you can find things to smooth your own travels, from podcasts to printable guides and (my favourite) customisable luggage tags. Jessica Adams is the managing editor of the site which recently celebrated its third birthday. It’s an evolving site that depends on its readers for all its secrets and tips. If you’d like to take a peak through their top picks, or even send in a few suggestions of your own, you can catch the goddesses online at holidaygoddess.com or on Twitter. 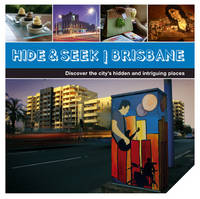 Having lived and worked in Brisvegas for a fair few years now, I thought I knew this city pretty well. But I learned a lot more while working on an awesome new travel guide recently and have subsequently been getting about checking out the other places it covers.

The third guide of its kind, following up from funky fellow eastern seaboard editions Melbourne and Sydney, Hide & Seek Brisbane focuses on the city’s hidden places—the kind you have to be a local to know and that not even all the locals know about.

As a general rule of thumb, if it appears in a Lonely Planet guide, it won’t be in Hide & Seek, Which is fantastic, because you get to see the real and the edgy of Brisbane—the big sleepy town moniker belies the cool things that are actually going on within its borders.

Hide and Seek’s broken into four self-explanatory, colour-coded sections: Hit the Streets, Treasure Trove, Feeling Peckish, and Night Owl and spans Brisbane venues and activities ranging from a quaint croquet club to perfumery to seeking out a bare-bones barber shop.

My own entries saw me braving the bull shark-populated waters of the Brisbane River at night for some kayaking by fairy lights, seeking out Brisbane’s largest cult video emporium, and heading along to a ‘Stitch ‘n Bitch’ knitting club, which meets each Tuesday at Brisbane institution The Three Monkeys and which I loved so much I’ve subsequently upped needles and joined. 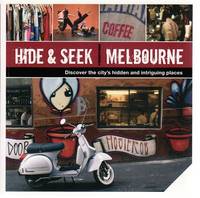 But even though I contributed to the book (and no, this blog isn’t about self-promotion, honest), I’ve been pretty chuffed at how it turned out have been getting about exploring the other places it features. Case in point: I last night had dinner at Eritrean restaurant Mu’ooz at Moorooka and loved, loved, loved it.

The name means ‘tasty and healthy’ and the menu is split pretty much 50/50 between vegetarian and meat dishes, something that makes my used-to-only-one-or-two-choices vegetarian heart sing. We had the vego platter for what I envisage being the first of many meals there and I’m still wondering how I’d never encountered the flat, pancake-like bread called enjera before now.
But I digress. Pocket-sized and budget-priced Hide & Seek Brisbane, this Australian-made publication comes complete with quirky maps and hot images, and the 40-odd venues and activities featured within its compact pages are easily foot- or public transport-accessible.

Yes, I’m in it. No, it doesn’t make it me biased. And yes, I will be buying up and imparting copies of it (and the super-funky Sydney and Melbourne versions) for Christmas and birthdays in between.