The Book of Lists: The Original Compendium of Curious Information This is a fascinating non-fiction collection of trivia and interesting stories broken down into the following chapters: People; Movies; The Arts; Food and Health; Animals; Work and Money; Sex, Love and Marriage; Crime; War, Politics and World Affairs; Travel; Literature; Words; Sports; Death; and Miscellaneous.

Here are some of my favourite lists from the book:

The Book of Lists contains a wide variety of interesting tidbits and obscure trivia and is bound to make you laugh. y Gregoire Delacourt
Written by Grégoire Delacourt and translated from French, The List of My Desires is set in a provincial town in France. Jocelyne is the middle-aged mother of two adult children and runs her own dressmaking shop and faces a turning point in her life when she wins $18M in the lottery.

The unexpected windfall forces her to reflect on what she really wants in life so she writes a list of her desires, hence the title. This is a lovely contemporary fiction novel and when Jocelyne re-writes the list at the end, it’s quite interesting to see what’s changed.

Lists of Note b y Shaun Usher
This book contains lists from a variety of people, ranging from Leonardo da Vinci, Charles Darwin, Roald Dahl and Marilyn Monroe to 9th Century monks. The book contains 125 lists with brief descriptions for each, including: 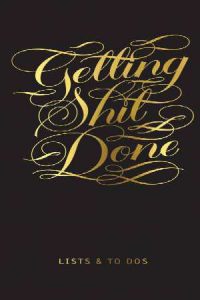 y Calligraphuck
Finally, if you want some stationery in which to write your own lists, you can’t go wrong with the Getting Shit Done List Ledger by Calligraphuck.

It would be remiss of me not to mention Schindler’s List by Thomas Keneally and there are an infinite number of Bucket List books available for every kind of reader.

Are you a list maker? Do you have any recommendations?