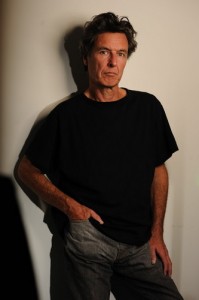 It’s called The Train Rider and is the third in the Darian Richards series of novels that I began a few years ago. The Train Rider is a serial killer in Melbourne – Darian was unable to catch him and that failure tore at him to the point where he abandoned the job in Homicide and fled to the Noosa River, hoping to push the demons away. Now he discovers that The Train Rider has followed him up to the Sunshine Coast and has embarked on a twisted psychological game in order to damage Darian as much as he can. Originally from Ararat in Melbourne, went to school in Geelong, lived in Melbourne for many years, then moved to Brisbane, then up to the Sunshine Coast and am now living on the Gold Coast.

I wanted to be a film director. This was in the 1960’s when there wasn’t a film industry so it seemed like a hopeless dream. I had a lot of pressure to sell cars as my dad and grandfather sold Holdens… I escaped that and managed to get a job at Crawford Productions, working in TV. The idea of becoming an author didn’t really emerge until a few years ago. It’s still feeling kinda weird.

Yikes! I don’t know. I do the best I can at the time and hope each work resonates with people. To have created something, be it a novel or a TV series or a movie, for people to watch or read, is such an honour.

I have a wooden desk in the middle of a large open room with wooden floors and old casement windows. The desk is a blend of clutter and order – the clutter is pushed to the edge of the desk in an orderly way. On the wall, looking over me, are retro movie posters, images of Frank Zappa and Bob Dylan, Noel Coward, Lady Gaga, Goya and Edward Hopper. My walls are totally covered with big and small posters and photos.

Anything – as long as it’s good. At the moment I am reading Team of Rivals, about Abraham Lincoln. Just finished Waiting for Sunrise by William Boyd and The Mission Song by John Le Carre. I read a lot of crime fiction and I love non-fiction, especially if it’s about African politics. I always go back and refresh on Roberto Bolano, Chandler and Damon Runyon.

John Fowles’ The Magus had a huge impact on me when I was 12. Up until then I was into comics – Superman and The Phantom, Ghost who walks! I read a lot of dross – movie tie-ins mostly so it wasn’t until I was 16 when the next book affected me. That was Othello.

The Phantom – Ghost Who Walks! Man Who Cannot Die! (Not that I want to be immortal – he’s just so cool.)

I love cooking. I’m big on Sicilian caponata at the moment. I also love cooking up a pot of ratatouille. It’s something I share with my lead character, Darian, who tells us how to cook the prefect ratatouille in The Train Rider. I used to love reading Rex Stout – his hero, Nero Wolfe, cooked up a feast (and gave us the recipe) in all of his crime novels. Other than reading, writing and cooking I don’t do very much. I think I need to get out more. I’m going to see Bruce Springsteen and the Hunters and Collectors in Feb 2014 so I guess that counts.

It used to be roast chicken but then I became vegetarian (almost vegan) a couple of years ago so now, if it’s not one of the Italian stews, it’s a salad with tons of fresh crusty bread and good vino. Having been a raging drunk in a past life, inhaling anything that resembled alcohol, I now drink in great moderation – usually a riesling.

John Lennon – because he wasn’t afraid to put himself up for denigration when he wrote Imagine. “You may think I’m a dreamer, but I’m not the only one.” In a hard world it’s a lyric like that which I find incredibly hopeful and uplifting.

Dealing with the growing expectation that entertainment – reading in this instance – should be free. Movies are free, TV is free, music is free – illegally gained of course but that’s not stopping people and the proliferation of this free material has created an awareness and expectation that you don’t need to pay. I’m not sure what the answer is. Interestingly, when Radiohead put out an album a few years ago and said: pay what you can afford, what it would cost in a shop or nothing if you can’t afford it, most people (I think the percentage figure was incredibly high)paid full price.