Okay, Pig fans! He’s back! And he’s up to a whole lot of mischief…again! Award-winning author / illustrator, Aaron Blabey, is renowned for his ability to create books with clear morals, but particularly his distinguishable style of outlandish characters in farcical situations…mostly self-inflicted! You may notice this theme in such books as ‘The Brothers Quibble’, ‘The Dreadful Fluff’ (reviews here), ‘Thelma the Unicorn’ (Dimity’s review), and our beloved (or maybe not-so) ‘Pig the Pug’.

We first got to meet Pig as a most greedy and selfish little Pug, refusing to share with his sausage dog flatmate Trevor, and even going as far as spitting and name calling. Once again, in ‘Pig the Fibber’, Pig is just as maniacal with his protruding eyeballs and lunatic behaviour! This time, he has learned something, and it’s not a valuable lesson. It’s how to lie… big, fat lies! 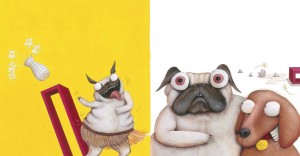 Literally marking his territory; that is, this book, the naughty little canine has set the tone from the outset. Pig loves to get his own way, and he’s perfectly comfortable hand-balling the blame onto his trusty victim – Trevor. He attacks pillows and smears dog food on the living room mat in a wild stupor. He breaks delicate household items in a crazed hula romp. He even tears up a wedding dress…just for fun. But Pig confesses – it was all Trevor. With absolute disregard for his flatmate’s feelings, Pig ‘lets off’ the biggest lie to be able to sneak into the cupboard to steal more food. Luckily, one dog is rewarded with the treats he deserves…and it ain’t Pig. Who knew a hard knock would see Pig wrapped up in his own head of truths?

Again, just like in the first book, brilliantly hysterical and energetic illustrations that are so characteristically Blabey are expressed in ‘Pig the Fibber’. Be aware of facial expressions to sympathise with Trevor, as the text is so focused on Pig’s actions. The animated rhyming text seems to roll off the tongue. Perhaps it’s slightly easier to read than ‘Pig the Pug’, and it’s equally enjoyable but a hint more crude.

We thought that Pig had changed his insolent ways last time, and he has since proved us wrong. Will he taunt us for a third time with more disturbing antics? Let’s hope so!

With another clear moral in being truthful and honest (or lack thereof), ‘Pig the Fibber’ is an inexorably amusing and crowd-pleasing book for children of all ages.

We’re all familiar with the theme of acceptance and being content with whom and what we are. It’s been relayed a thousand ways, right. But have you ever discovered self-worth with the aid of a carrot? Thelma has. 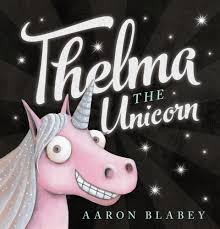 Aaron Blabey’s dazzling new picture book, Thelma the Unicorn not only deals with this theme in a fresh, clean, pink unicorny way but it has a sparkly front cover to boot; guaranteeing extra eye-appeal.

Thelma is a little ordinary pony who yearns for loftier heights. She dreams of being a prancing, pampered unicorn, the sort that never goes unnoticed. She believes this will elevate her into special-dom.

Her best mate, Otis tries to convince her otherwise. ‘You’re perfect as you are,’ he insists. But Thelma isn’t having a bar of it. When she spots a carrot on the ground, ideas of grandeur and transformation take serious hold and after a truck incident involving pink paint and glitter, she reinvents herself as, Thelma the Unicorn.

A shimmering star is born 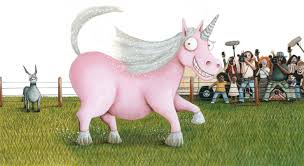 as she sashays before a world that quickly becomes obsessed with her glamour. Intoxicated with her newfound fame, Thelma laps up the attention.

However, with great recognition often comes diminished privacy as Thelma soon discovers. Adoration rapidly turns into possession and Thelma’s life just as wildly slides out of her control. Until that is when one night she can no longer stand the isolation of fame and makes yet another life-altering decision. I truly love Blabey’s rendition of this tried and tested theme. The lilting rhyming text lopes along at a much more satisfying pace than Pig the Pug did for me (apologies to any Pug fanatics). It is a real pleasure to read.

I have always been a fan of Blabey’s bulbous-eyed human depictions as well, but really enjoyed the simple, long-lashed beauty of Thelma and Otis, who sit harmoniously alongside his quirky human character illustrations.

Tongue in cheek humour pops up regularly in the text and illustrations throughout Thelma’s foray into fame-dom, which helps to point out to young readers that all things that glitter are not necessarily that attractive in the long run and it’s okay being who you are even without a horn stuck on your head. Thelma the Unicorn is the perfect kind of ‘special’ to share with three-year-olds and above.

Out this month and available, here.