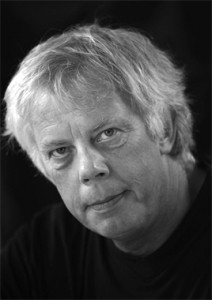 Mal Peet was a delight to read and meet. I can’t describe him as a YA author because he would loathe that description, refusing to see his writing pigeonholed into age categories. But clearly both young adults and adults appreciated his novels, and children his picture books.

He has left a legacy of memorable books (published by Walker Books) and is an author I collect, beginning with Keeper (2003), which won the Branford Boase Award in the UK and was shortlisted for the Deutscher Jungendliteraturpreis in Germany. Although I recall him saying that he never played the role of keeper/goalie in football, Mal created a vivid picture set against the backdrop of an imaginary South American jungle. Tamar (2005) is one of his two books set around war and spying. It won the Carnegie medal and, like most of his novels, is for mature readers.

The Penalty (2006) and Exposure (2008) re-introduce journalist Paul Faustino, first met in Keeper. Exposure is a bold re-interpretation of Othello. It won the prestigious Guardian Award and was shortlisted for the Australian Inky Awards. This trilogy of sports novels achieves the distinction of having literary merit and also being interesting. Life: An Exploded Diagram (2011) is the partly biographical story of Clem who grew up in the 1960s in Norfolk, England. He outgrows his home, his parents and his place. He also outgrows his social status by falling for rich landowner’s daughter, Frankie.

At the same time that Clem is growing up, the Cold War, a time where the two superpowers, the USSR representing the Communist Eastern bloc and the USA, representing the Capitalist West, are playing a game of cat and mouse for high stakes – the safety or decimation of the world.

There are a number of explosions – actual and anticipated – while President John F Kennedy tries to stop his war chiefs from retaliating against the Russians and destroying Cuba.

When I first spoke about Life: An Exploded Diagram amongst other books, senior English teachers burned with curiosity. That was the book they wanted to talk about afterwards. I was incredibly fortunate to later chair Mal at the Sydney Writers’ Festival with the brilliant Ursula Dubosarsky. We explored rites of passage in the 1960s through Mal’s Exploded Diagram and Ursula’s The Golden Day. Mal described Ursula’s writing style as ‘elliptical economy’ and his own writing as ‘verbose’ but ‘generous’ may be a better description. He was a raconteur, sitting forward in delight at the questions and I treasure one email to me, which begins, I do so like using the phrase ‘Hello, Joy’. The opportunities are none too common. My favourite of Mal’s other books is Cloud Tea Monkeys, co-written with his wife, Elspeth Graham, illustrated by Juan Wijngaard and shortlisted for the Kate Greenaway Medal. It’s a poignant tale about a young girl who has to take her ill mother’s place working in the tea plantations.

Mal Peet was an ebullient, intellectually active and curious man. He wrote with a broad sweep, across WWII and the Cold War, the Cuban Missile Crisis and the Football World Cup – but still with intimacy by telling personal stories. He was an inimitable writer.