Time to feature a few (plus a few more) stories that originate far from our shores but possess buckets of charisma worth sharing with the small people in your lives. I am fast becoming a fan of Salina Yoon thanks to her beguiling Penguin picture book series. Her latest (if you don’t count the penguins! –  Penguin and Pumpkin), is Found, a story personifying selfless friendship and sound morals, as anthropomorphically depicted by Bear and Bunny. Crisp, clean narrative accompanies solid simple illustrations that utilise perspective well and convey emotion in a supremely stripped-back honest way. Kiddies 2 – 5 years-old will adore Bear’s attempts to re-home a lost bunny, undoubtedly relating to his consequent heartbreak when he discovers how deeply attached he’s become to Bunny when forced to give him up. May 2014

ere’s a Dinosaur in My Bathtub by Catalina Echeverri

Remember Mr Snuffleupagus, Big Bird’s unerring buddy who never revealed himself to Sesame Street folk? Well, Amelia has a secret too. She has a French dinosaur named Pierre in her bathtub who is even more apt than Snuffy at remaining surreptitious. Unbeknownst to the rest of the family, she and Pierre have terrific fun together. They share galactic hot chocolates and tour magical lands of candyfloss trees; but only during the summertime. Come autumn and it’s time for Pierre to move on. Echeverri paints a fantastical world more enormous that Pierre himself. Bubbling with whimsy and colour and the occasional French phrase, this picture book is manifique for pre-schoolers and dinky di dino 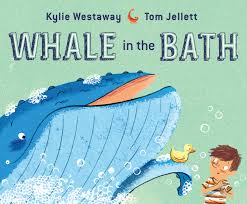 (and if you want more great bathtub yarns, check out Whale in the Bath by Kylie Westaway and Tom Jellett . A similar tale about dealing with disbelief and wild imagination whilst trying to dislodge a gigantic sea mammal from the bathtub before all trouble breaks out. Massive fun from Allen & Unwin September 2014)

The Dawn Chorus by Suzanne Barton 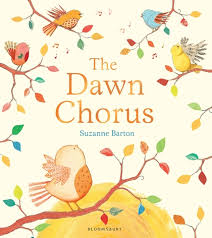 This one positively hums with heart. Charm flits effortlessly from page to page. A true tactile delight; from the sumptuous cloth cover to the beautiful collage and painted illustrations. Peep is a little bird with a modest yearning to be part of a greater whole, The Dawn Chorus. However, despite his best efforts, he never makes the morning shift in time and despairs his singing dreams are at an end until he meets someone who sings as sublimely as he does. She too is not part of The Dawn Chorus, for a very special reason. An uplifting fresh look at fitting in and self-discovery. Glorious for 3 – 5 year-olds and those not-so-early birds. June 2014 Sarah Maizes and Michael Paraskevas are one of those picture book writing teams that ‘work’. They have created a rollicking series of visually yummy picture books spotlighting various reluctant-child-vs.-pressured-parent situations beginning with On My Way to the Bath. These two, On My Way to Bed and On My Way to School follow the familiar pattern: child asked to do something by ubiquitous unseen parent; child presents argument against request; child (and her companion Froggolini) embark on a series of madcap adventures endeavouring to delay the inevitable for as long as possible. Every double page in each of these books is saturated with bold, zany colourful fun. Mundane is aptly transformed into marvellous with clever child-typical twisty endings. Exasperated parents will find it hard to wipe the smiles off their 2 – 5 year olds’ faces with this one. Hijacking a child’s imagination has never been such silly fun. February and August 2014

There’s a Lion in My Cornflakes

with another slice of silliness, we end today with the first time collaboration of Michelle Robinson and Jim Field and There’s a Lion in My Cornflakes. Ever wanted something so bad you’d do just about anything to get it? Eric and his brother, Dan make the ultimate sacrifice spending a whole year’s pocket money on one hundred packets of cereal so that they have enough vouchers for a free lion. They endure cornflake overload until Mr Flaky finally delivers their prize, but it’s not what they expected. A quirky, laugh-out-loud tale about the dire consequences of wanting too much and not always getting what you want. It encapsulates the magnetic attraction kids possess for things often out of reach with a wildly whacky style. And, it comes with thirty vouchers to get them on their way! Brilliant. I am in love with Field’s exuberant illustrations too. Suitable for consumption by 2 – 6 year-olds and those who don’t buy breakfast cereals for the taste but for the toys! July 2014 All these titles by Bloomsbury Publishing Australia and available now through Boomerang Books.