Since watching the popular ABC television series recently my Grade 1’er is obsessed with Little Lunch. And what a delight she received when the episodes arrived in book form on our doorstep! From the exuberant newspaper columnist, Danny Katz, and illustrator partner extraordinaire, Mitch Vane, Little Lunch: Triple Snack Pack; aka: “The Office, in the playground” (Canberra Times) is an unputdownable winner for all primary school kids. Meet the cast; daydreamer Battie, nerdy Atticus, bossy Debra-Jo, courageous Melanie, mischievous Rory, sporty Tamara, and their easy-going Grade 5 teacher Mrs Gonsha. The show unfolds in The Old Climbing Tree when, at ‘Little Lunch’ (or recess), clumsy Debra-Jo decides that it is her duty to organise to have the sticky-outy rooty climbing tree cut down. All her friends are utterly dismayed and form a petition to save their much-loved tree. Through a series of twisted consequences, including Debra-Jo and Rory receiving detention, Melanie and Tamara receiving Green Ambassador Awards, and the tree finally being cut down, a satisfying ending is reached with a tree replacement and one final mishap for our clumsy attention-seeker. 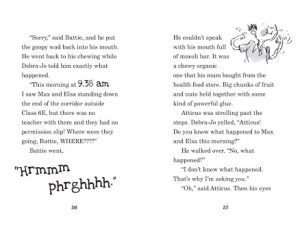 In The Corridor Outside Class 6E, serious hall-monitor Debra-Jo diligently observes the unusual sudden disappearance of twins, Max and Elsa. At Little Lunch, her attempts to question her mates becomes a hugely sticky mess of unjustified assumptions and exaggerated stories. Battie is unable to speak with a mouthful of chewy muesli bar. Atticus concludes they had been expelled. Melanie and Tamara hypothesise that the white-jacketed woman they saw took them away for a medical emergency. Rory claims to have seen Max with handcuffs and a foreign police officer arresting him for the murder of Elsa. Hilarity follows as their imaginations go wild, and it is the final straw for Battie as he eventually manages to speak (or yell, rather) – the twins got braces! 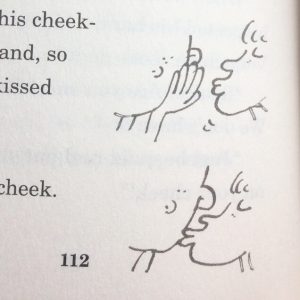 The final chapter is The Relationship, taking on the fickle nature that is upper primary school dating. Receiving an anonymous, folded note with the words, “Will you go out with me?” has left Rory totally stumped. How do you actually ‘go out’ with someone? Why is an older, Grade Six girl asking him out? And, who is she? Rory desperately tries to seek advice, but his friends are useless. Until Debra-Jo has a plan to help Rory advance in the kissing-department. Which, might I add, goes horribly wrong…or does it? Uncharacteristically, Rory cleverly combines the Science of ‘magnetism’ with relationship matters of the heart, which is not that scientific but receives a great applause, nonetheless.

“A lot can happen in fifteen minutes!”

Check out other Little Lunch books in the series, including Triple the Threats, The Monkey Bars, The Bubblers and The School Gate.