Art and music feature in some recommended picture books and Christmas gifts. Wonderlands: The Illustration Art of Robert Ingpen published by the National Library of Australia

Robert Ingpen was born in 1936 and is the only Australian illustrator to have won the prestigious international Hans Christian Andersen award. He is a virtuoso of painterly artwork and has illustrated Australian stories such as Storm Boy by Colin Thiele, Mustara by Rosanne Hawke, Ziba Came on a Boat written by Liz Lofthouse, The Poppykettle series and The Afternoon Treehouse and a long list of children’s classics such as Alice’s Adventures in Wonderland (hence the title of this tribute to his work), Peter Pan and Wendy, The Wind in the Willows and The Secret Garden. The Nutcracker, The Night Before Christmas and A Christmas Carol will be perfect books for Christmas. His most recent books include the awarded outback-based Tea and Sugar Christmas and Radio Rescue! (both written by Jane Jolly). Wonderlands gives a generous insight into these books and others. It is a must-have celebration of children’s literature through the lens of our maestro, Robert Ingpen. Music is important for the pleasure it gives and because it’s good for the brain and can lead to unexpected friendships and opportunities. Enjoyable and useful to use in homes, schools and music schools, The School of Music is a lavish compendium of music, musicians and instruments in picture book form.

Musician characters (such as Diva Venus, a star singer, Ronny ‘Beethoven’ O’Reilly, a composer and Roxy Mojo, a percussion specialist) are introduced at the beginning of the book and feature strategically throughout to explain concepts. Section 1 looks at different types of music and instruments and how music connects with film, maths, architecture and other disciplines. Section 2 offers a musical toolbox, which enables children to write music, beginning with fun graphic scores using pictures and symbols. Section 3 is about children making music themselves. The book suggests diverse ways such as making a kitchen orchestra as well as playing a conventional instrument or singing. It concludes with tips on performing and composing.

There are bonus music samples accessed by the QR code at the end of the book and children could dip in and out of this book or use it as a Christmas holiday music appreciation and education course, ideally even alongside learning a musical instrument. If you’re already thinking how to fill the sleigh this Christmas, climb on in and assume the brace position because it’s only 44 more days until Christmas. Yes! As terrifying as that may sound, here are three fantastic new reads to lessen the impact. They are cheerfully Christmassy, are already, or destined to be classics and just perfect to start your countdown to Christmas in earnest with. 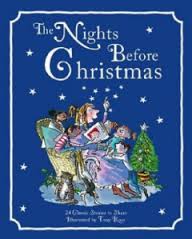 I don’t like to risk cavities on store-bought Advent calendars and don’t always have the time to make my own, so when The Nights Before Christmas: 24 Classic Stories to Share magically appeared, I bubbled with festive gratitude.

Twenty-four excerpts, poems, and yuletide stories even carol lyrics are thoughtfully brought together in a magnificently presented hardback anthology. Readers as young as seven will enjoy immersing themselves into this collection of traditional and contemporary tales but the real joy ignites when you spend each night with your child(ren) sharing the magic and anticipation of Christmas together.

Storytellers including Tolstoy, Hans Christian Anderson, the Grimm Brother, Dickens, Oscar Wilde and Louisa May Alcott all contribute to the festive soirées but perhaps my favourite ‘night’ is Number 22, Yes, Virginia, There is a Santa Claus; reaffirming once again that to simply experience magic one need only believe in it.

Lavishly illustrated in glorious full colour by acclaimed UK illustrator, Tony Ross, The Nights Before Christmas is the penultimate Advent Calendar for bibliophiles and true lovers of Christmas. This is one Christmas keepsake you won’t be throwing out with the Christmas crackers. Highly recommended. 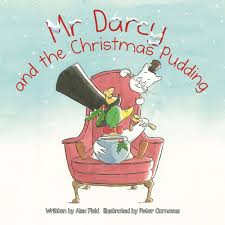 My November Christmas to-do list often involves provisioning the pantry with more festive goodies than anyone can eat and making the Chrissy Pud, which is why Mr Darcy and the Christmas Pudding by Alex Field and Peter Carnavas is included on this countdown list.

The ineffable Mr Darcy adores Christmas and having mastered his former social ineptitude with the help of his friends in the previous picture books, Mr Darcy and Mr Darcy and the Dancing Duck, prepares to involve them in a splendid yuletide celebration. He invites his nearest and dearest over on Stir-up Sunday to help bake the Christmas pudding but is somewhat disconcerted by the unexpected presence of Mr Collins.

Plucky ducky, Lizzy appeals to Mr Darcy’s more charitable side until he finally relents so that everyone, including Mr Collins, enjoys Christmas time, pudding and all.

As with all these titles, Mr Darcy and the Christmas Pudding draws deliciously on Christmas traditions, mode a la Austen and how the expectation of the big event is often sweeter, more satisfying and twice as exciting as the day itself.

Pride and Prejudice fans have another one their collections. Three to six year-olds will be begging to lick the pudding bowl. 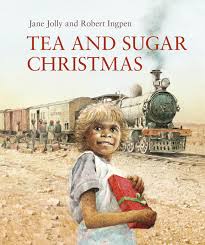 Another picture book that heralds the beginning of the festive season and is a definite keepsake for Christmases to come is Tea and Sugar Christmas by Jane Jolly and Robert Ingpen.

This is less of a picture book and more of a beguiling glimpse into the yesteryear life of Kathleen, a young resident of a settlement town along the Nullarbor Plain rail link back in the days when the Tea and Sugar Train travelled from Port Augusta to Kalgoorlie once a week.

Jolly’s substantial prose ably transports us into Kathleen’s world past the ‘drooping peppercorn, bent acacias and scraggy salt bush’ as she eagerly awaits the provisions train in a heat so torrid her feet sear ‘like scones on a griddle’. Chocolate could only be brought in winter when it was less likely to melt.

Ingpen’s glorious line pencil drawings belie a world of colour as each page unfolds into a spectacular double panoramic spread emphasising the breathtaking enormity of the outback and the complexity of the Mixed Goods Train No 5205 aka The Tea and Sugar Train itself. 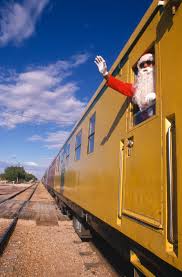 But what is so special about this week’s train, the one that every child on the Plains waits for on the first Thursday of December every year? Take the trip and find out for yourself. You’ll be glad you did.

Tea and Sugar Christmas truly epitomises a child’s anticipation and expectations of Christmas no matter where or how they live. And as with all NLA publications, the fascinating factual inclusions ensure this is one of those special unexpected Christmas surprises you are sure to treasure.

Make room in the sleigh for more after you check out these fantastic gift ideas for kids from the Kids’ Reading Guide 2014. And stayed tuned for more fantastic pre-Chrissy posts guaranteed to keep you and your little ones inspired and excited and above all, well read!