With only a week to go before you sling a few more lamb chops onto the barbie, here is swag of ‘must read’ Aussie kids’ titles to put on your reading list, (not the barbie). 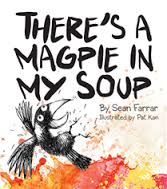 There’s a Magpie in my Soup Sean Farrar & Pat Kan

It’s that time of year when raucous baby magpies scream night and day for food. Seems they are no different when submersed in soup. Sean Farrar takes pre-schoolers on a merry epicurean romp through a menu of Australian critters as they pop up in the most extraordinary of places, (the only one that failed to make the endemic Aussie grade was the porcupine whom I felt could have been replaced by the Echidna). Snakes slither from cakes, cockatoos appear in loos. Possums get stuck in pies and blue tongues pop in for lunch. Kan’s chipper illustrations jockey this ditty merrily along  as rhyme and fauna are introduced to young readers in a fun, relatable way. A jolly little bedtime read. 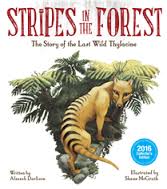 Demonstrative illustrator, Shane McGrath teams with accomplished author, Aleesah Darlison in this picture book for mid primary readers about the last Tasmanian Tiger. Portrayed in a sweeping epic narrative from a female tiger’s viewpoint, Stripes in the Forest escorts readers through Tasmania’s pre-settlement days to present day, as she recalls a life of cyclical and human influenced changes. Gradually numbers of her kind reduce to the point of assumed extinction however, Stripes ends on a positive note of supposition; what if she is not the last of her kind?

Stripes in the Forest is alluring for its historical references, detailed Thylacine Facts and nod towards the need for environmental awareness and understanding. Full marks for this picture book for making a difference. 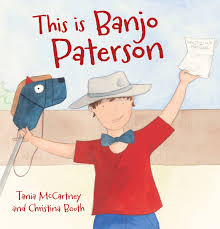 Two leather clad gold embossed volumes of verse sit reverently upon my bookshelves: The Singer of the Bush and The Song of the Bush – the collected works of A B Banjo Paterson. Now another, smaller, more modest but equally as treasured title will accompany them; This is Banjo Paterson.

This inspired new picture book by the notable partnership of McCartney and Booth is as entertaining as it is beautiful. It begins in the middle of the Australian bush, at least Andrew Barton ‘Barty’s’ story does but do not be misled by the smooth  informative narrative of McCartney’s for Booth’s illustrations tell another story. Readers are invited into Barty’s urban backyard where they are introduced to his inclinations, desires, friends, and favourite pastimes. He has a hankering for horses and rhyming words but ‘is also a fine sportsman’.

Barty harbours a secret desire to write in verse as he grows and one day one of his anonymously submitted pieces is published. From then on end there is no stopping ‘Banjo’ as his name becomes synonymous with the classic bush inspired, character driven poetry and stories many of us know to this day.

Quiet and unassuming in its delivery, This is Banjo Paterson is visually rich and emotionally satisfying to read.  Many aspects of Banjo’s accomplished life are covered in a way that is both revealing and appreciable for young readers.  McCartney’s knack for conveying facts in a beguiling spirited fashion is put to good use in this picture book that broadens minds and warms hearts. The inspired broadsheet replication at the book’s conclusion includes sepia coloured photographs of Paterson and a more detailed chronological description of his life plus extracts from several of his most well-known poems. Highly recommended for early learners and primary aged readers, This is Banjo Paterson is a marvellous introduction to one of Australia’s literary heroes. 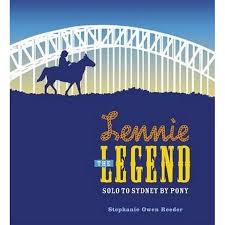 Once upon a time, a nine-year-old boy named Lennie Gwyther took his pony, Ginger Mick for a ride. It was a very long ride, from country Victoria to Sydney, over 1,000 kilometres in fact but in the days of the Great Depression back in the early 1930s, people were accustomed to making such long arduous journeys.

Lennie’s mission was to be at the opening of the Sydney Harbour Bridge and his tenacity and determination were recognised and admired by the entire nation. Lennie’s story is adeptly told by Reeder with animated narrative and is interspersed with complementing historical snippets. Occasionally, comparisons are made between present day and last century living. Stunning photographs of this slice of Australia’s past are included along with fascinating statistics and notable people. The result is a feature-rich read, well endowed with fact and good story telling. Ideally suited for primary aged readers and those who love legends. 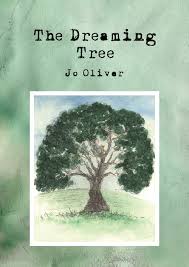 Whilst suffused with the essence of the Australian landscape and renowned poets, let’s take a moment to appreciate the free verse poetic stylings of Jo Oliver whose, The Dreaming Tree reflects the ‘joy and freedom of being a child in Australia’.  Oliver’s poems, many of which are centred on the fierce and dramatic beauty of the Australian countryside, flow and ebb with all the finesse and passion of a verse novel. They are both uplifting and enlightening, and an extreme joy to read. This collection is presented in a picture book format accompanied by Oliver’s own dreamlike illustrations.  Her note at the end stresses that ‘poetry is fun’ and simply ‘feeling and thought playing together in words’. Oliver’s feelings and thought play magnificently together in The Dreaming Tree, for which I can list no favourites for I relished them all.

Highly recommended for primary and lower secondary school students as an excellent illustrative tool for capturing the essence of feeling in verse and injecting an appreciation for the enjoyment of poetry into the young.