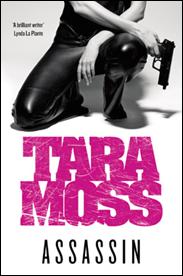 Crime writer, TV presenter, brand ambassador for Jacqui E, goodwill ambassador for UNICEF and now UNICEF Patron for Breastfeeding for the Baby Friendly Health Initiative in Australia – Tara Moss is a modern-day superwoman, and her books are mega-sellers.

Assassin is the last and latest in Tara’s Makedde Vanderwall series – a series that has sold over half a million copies in Australia alone. The series is available in 18 countries and 12 languages, including Italy, Spain, Portugal, Germany, UK, France, Russia, Romania, Hungary, Croatia, Czech Republic, Poland, Japan, Brazil, Australia and NZ. These dark and glamorous crime thrillers feature one of the most iconic heroines in Australian crime fiction, model-turned-PI Makedde Vanderwall. Mak is a huge favourite with readers, and Tara became the top-selling crime writer in Australia for several years running. Now, after a few years’ break, Mak is back. And this time she’s ready to make her own justice. Tara Moss famously takes her research for her books to extreme levels, qualifying as a private investigator as well as being both choked to unconsciousness and set on fire in a quest for authenticity. She is also involved with a number of charities and is a supporter of the Stella Prize, a new literary award for women writers in Australia.

‘A thriller packed with sex, suspense and suspicion. Hold on tight!’ – Woman’s Day

‘Moss is a fluent writer who stacks up the fun with lots of violence, sex and thrilling suspense’ – The Age

In my last post I wrote about a nightmarish scenario in which books we read are created automatically by a software algorithm. I’ve had time to think about it since then, and to use the wonderful TweetWriter, a promotional tool for the Melbourne Writers’ Festival. TweetWriter takes the body of writing that makes up your Twitter feed and creates a customised book based on your style of expressing yourself, which, as everyone knows, is usually at its finest in tweet form. Here’s my automagically customised back cover blurb:

When asked to described the real Joel Blacklock, Joel would often say “I am the walrus”, but 127 loyal fans will always know Joel best as the prolific writer who published over 1643 works, all written from Joel’s secluded playboy style mansion in Sydney, Australia.

In this astonishing latest work, ‘THE NAME OF THE KIND’, Blacklock’s writing is both mesmeric in tone and labrynthine in structure, and is surely destined to achieve the status of a contemporary classic.

Hear that? ‘Mesmeric in tone and labrynthine in structure’. One hundred and twenty seven fans can’t be wrong!

Let’s just say the software algorithm that will write a true bestseller is some time away. Quite aside from the fact that the back cover blurb is littered with errors and the title of the book is different on the front and back (I tend to think The Name of the Kind is better than The Kind of the Rest – thoughts?) I can’t imagine a single person would even pick this book up off the shelves.

Nonetheless, for the curious and the lazy, here are a few of Twitter’s finest minds at work.

What about our potential prime ministers? Here’s Red:

And the Mad Monk?

Check out your own book titles and link to them in the comments.

The Melbourne Writers’ Festival runs from 27 August to 5 September 2010.