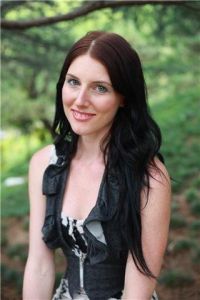 Tara Eglington, author of How to Keep a Boy From Kissing You

How to Keep a Boy From Kissing You is the story of 16 year old Aurora Skye, who is a little like a modern day version of Jane Austen’s Emma – she thinks she knows everything about love and dating, when really her experience is entirely theoretical and often far off base. She runs a program called the Find a Prince Program and she’s constantly getting herself and her friends into the most ridiculous situations in the process of finding them their Potential Princes.

At the same time, she’s dealing with her dad, the NAD (New Age Dad) who’s in the midst of an existential crisis that began after Aurora’s mum left four years ago and her pesky next door neighbour Hayden Paris, who doesn’t believe that Cupid needs Aurora’s assistance. He’s also been witness to many of Aurora’s very embarrassing moments – which seem to happen every time she tries to keep a boy from kissing her (she’s saving her first kiss for her Potential Prince).

When her friend’s love lives don’t seem to be going to plan, Aurora is forced to take her program to the next level and signs up to be part of the school play, Shakespeare’s Much Ado About Nothing. Unfortunately she’s cast as Beatrice, opposite Hayden Paris’s Benedict – and they’re scripted to kiss! Aurora launches a full scale operation to save her first kiss, help her friends achieve their happily ever afters and protect the vulnerable NAD from the crazy interpretive dance teacher who’s seemingly stolen his heart.

I wanted to write a book that you could curl up with if you were having a bad day and then find yourself laughing on every page. I hope I’ve achieved that.

I grew up in Byron Bay, which I still consider to be one of the most beautiful places in the world. I went to a creative arts high school, which definitely helped inspire me with confidence in respects to expressing myself in a creative way. My
upbringing also influenced my writing in terms of some of the themes in ‘How to Keep a Boy From Kissing You’ – the NAD (New Age Dad) and the interpretive dance classes that Aurora is forced to participate in are very close to the alternative aspects that define the region. Nevertheless, I still love Byron and spent part of my time writing the sequel to How to
Keep a Boy from Kissing you (How to Convince a Boy to Kiss You) whilst on holiday at my family home up there. I now call Sydney home.

I thought ‘Pirate’ was a legitimate profession. I spent a lot of my time making pretend gold chests and coins out of paper. That along with the fact that I thought I’d grow up and have a vault of money to swim in like Scrooge McDuck from Duck Tales, makes me worry that I was a rather materialistic child!

My father tells me at age 11 I told him very matter of fact that I was going to be an author and write books from my house in Maui. I now write books, but the house in Maui is yet to materialise (I’ve given up on the vault of money!)

Aurora and her story ‘How to Keep a Boy from Kissing You’ will always hold a very special place in my heart. I wrote the book when I was 21, just because I wanted to tell a story. I hid the fact I wrote a book for a very long time, because most
people are very quick to tell you the miniscule odds of getting something published. However I always believed in the worth of the story and having the chance to share it with young girls (and the young at heart) has meant this time has been one of the happiest of my life. That said, I’ve immensely enjoyed the sequel and hope all my readers will too.

I write in my little studio, surrounded by posters of very romantic scenes (i.e. Tiffany ads and Pre-Raphaelite artwork) signs proclaiming ‘love’ and many candles. Very Aurora-esque room. However I also write after work in the office – I’m a firm believer that a writer can and should be able to work wherever. I’ve learnt to be able to focus even if there are conversations being shouted around me.

I pretty much read just about every YA novel out there when I was growing up, and writing within this genre I try to stay aware of what’s going on in the market. When I’m writing however I tend to read non fiction – things like specific
histories like Colour by Victoria Finlay or Beauty by Umberto Eco. I also read alot of poetry, because it tends to reflect upon the whole gamut of human emotion and triggers certain thought processes for a writer.

Anything by L.M Montgomery. Anne of Green Gables and her other novels were a huge part of my adolescence. I loved her characters fiercely and the summer of my fifteenth year was spent finding and reading every work she had ever
written. There is such a beauty to the worlds that she created. There are shades of Anne and Gilbert in Aurora and Hayden – Aurora’s fierce dislike of Hayden hints at how attracted she really is to him, as did Anne’s for Gilbert and both characters are huge romantics with big hearts.

Anne of Green Gables! She gets to marry the gorgeous Gilbert Blythe, so enough said. Plus, she has the most optimistic, lovely view on the world. Every stranger is a potential kindred spirit to her. I like that notion.

I adore going to the theatre. I would love to have the chance to write for theatre one day. There’s something magical about seeing the written words of a script brought to life so vividly and often so unexpectedly by the actors that is tremendously affecting. Johanna Murray Smith just blows me away as a playwright – I am both in awe and immensely envious of her ability to write such hilarious yet immensely emotional stories. Other hobbies include adding to my jewellery collection, planning hypothetical luxury holidays and a worrying addiction to Pinterest.

Food – dark chocolate strawberry Lindt – far too many pieces get consumed whilst I’m writing. Favourite drink? If I’m being saintly its fruit smoothies, if I’m being sinful its magaritas.

There are too many to name. Anyone who takes a risk and puts themselves out there as creative professional, whether that’s as a writer, film maker, jewellery designer or musician.

The transition from traditional print form to e-books is what is really shaking things up for the industry, along with the availability of cheap books from overseas websites – the traditional local bookstore is finding it tough times to survive.

E books can be opportunities for readers to discover new authors because its less of a risk price wise to buy something new. If someone enjoys an authors work, they may then buy the entire backlist and become a new fan. That’s a boon for the author.

However I do believe that there will always be people who prefer the print form (I am one of them) and we just have to ensure that we support our booksellers by buying locally.