If you thought Claire Zorn’s first two YA novels, The Sky So Heavy and The Protected, were brilliant, you’re going to need double tinted Ray Burns for her latest masterpiece, One Would Think the Deep.

Zorn manages to mould rough edged, grit-encrusted reality into exquisite accomplished prose with the mere flick of her fingers. One Would Think the Deep is a story that surges with emotion, confrontation, and ultimately, hope.

If I were to reflect on Sam’s story too deeply, I’d be overwhelmed with the melancholy of it, of him but this is not a tale of woe and hopelessness, in spite of its gently grim beginning. Its sincerity and swagger from the opening lines swept me along and held me afloat until the very end.

Shortly after one fateful New Year’s Eve, Sam Hudson finds himself suddenly orphaned, teetering on the precipice of shock, grief, graduation and homelessness. My stomach filled with sick ache for him as he called his Aunty Lorraine to inform her of his mother’s premature death.

With nothing more than his skateboard and a collection of 90s something mixed tapes (he listens to Jeff Buckley on his Walkman with the same obsession I did to ABBA), Sam lingers uncomfortably in the small coastal town of Archer Point with his aunty and cousins, Minty and Shane. He is caught in a turbulent no man’s land of past boyhood memories and buried family secrets, incapable of finding his fit. Grief and despair are his most loyal companions, second only to his cousin, Minty with whom he spent a chunk of his childhood.

Minty is the la tter day version of Taj Burrows, young, gifted, a surfing legend amongst the local crowds. His laconic life views and ability to work any wave endears Sam to the ocean. But it takes a few months before his newfound surf therapy begins to take effect. Despite the elegant monastic simplicity of ‘a life in the water’, Sam’s life continues its complicated hurtle toward (his) self-destruction. He pines for a past he doesn’t fully understand, yearns for the affections of a girl he can barely speak to and is constantly at crushing odds with most of his family members including, Nana. Sam’s emotional dichotomy of good boy battling the bad within is fascinating and heart wrenching at times. It’s impossible to dislike him because of what you feel for him feeling so much.

Sam’s story of hurt and healing is beautifully rendered. Even the most vicious of emotional situations are depicted with refined tenderness so that I found myself weeping emphatically throughout, not just at the end where you’d expect a need for tissues.

Each character is drawn with knife-edge sharpness. Each speaks with a clarity that never dulls. Every sense is heightened by the wrenching complexity of the lives of this very inconsequential, simple group of ordinary individuals. And it’s not just Sam who is damaged and vunerable. Each is noticeably flawed or at least weighed down by their own limitations to a point of exquisite confusion. I loved them all.

It’s not the surf, time, or chance or even family that ultimately saves Sam in as much as they all conspired to also undo him.  It’s that old chestnut love, which I believe is the true nucleus of One Would Think the Deep (the moments between Gretchen and Sam are incomparable).The ability to surf the ‘glistening wake’ of your leviathan fears and laugh about the results with people who love you is ultimately the key to surviving the ride.

If you are experiencing loss and your soul feels displaced, if you have a passion for the waves or you are still in love with the sounds of the 90s, then you must submerse yourself in this book.  I can almost hear Jeff Buckley crooning Hallelujah… 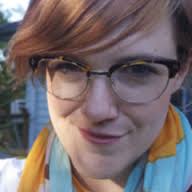 Stick around…in the coming weeks I’ll be chatting more deeply with Claire about her latest work and how she developed such impressive surfing lingo.  Meantime, you can find all her great reads, here.