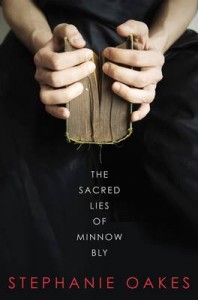 Well, just WOW. I did not expect to be terrified absolutely witless while reading this. BUT I WAS. This book is wonderful and addictive and…frightening.  If you need me, I shall be the one rocking in the corner giving random pterodactyl screeches from the trauma. True story.

The Sacred Lies of Minnow Bly by Stephanie Oakes is about cults, juvie, a handless girl, and learning to think for yourself. I love anyone or anything that promotes thinking for yourself. So this book automatically climbed to epic proportions for me.

Also it’s a retelling of The Girl Without Hands by the Brothers Grimm! Now. I am a nerd and, because I didn’t know the original fairy tale very well, I researched and wow, just wow. There are SO many references to the original! It’s really quite clever. The Sacred Lies of Minnow Bly did tiny things like referencing a pear orchard, to adding an “angel” (well, that’s someone’s name), to WHO does the cutting of Minnow’s hands. BUT! The book also stands completely on it’s own if you don’t know the original tale.

Basically Minnow Bly escapes her cult after her hands are cut off and then ends up kicking someone half to death and is sent to Juvie. We meet her roommate, Angel, who is sassy and incredible and so well written. Minnow learns how to read and sheds her naivety. There is so much character development a nd change — and not just for Minnow but for the secondary characters too! There’s emphasis on family (good and negative) on consequences and actions, on murder vs revenge vs self-defence. It critiques the justice system. It asks really hard questions (like can self-defence be an okay reason for murder?) and it explores friendship between unlikely people. It melted my heart several hundred times.  I was in awe of Minnow and I adored her. She’d been through psychological and physical torture (HER HANDS GOT CUT OFF OMG) and yet she could still stand and fight at the end?!? She still had hopes and dreams and wanted things.

Also it’s quite creepy and bloody and gory. The cult has a TON of horrific punishments. After the first 100-pages I was very creeped out….aaaand I couldn’t stop reading.

It did have a lagging, slow spot about 3/4 in though, but mostly the action was go! go! go! It’s written with a “thriller” vibe, so you know the end result (Minnow is in jail, handless) but WHY and what happened with the cult? And who burned things? AND WHO IS DEAD? And who’s the killer?! And you just keep flipping pages to find out!

But basically this was a solidly fabulous debut! It was a glorious retelling, yet a fabulous story on it’s own. It was freaky and terrifying and addictive. This author has shot onto my I-will-read-anything-she-writes list.