On my recent bookshop tour of London there were more books by Morris Gleitzman on the shelves than copies of The Book Thief. This is not to detract from Marcus Zusak’s famous and well-stocked literary export but means that there were many, many Gleitzmans on display, a fantastic achievement for our popular Australian children’s and YA writer.

I moderated a session with Morris and the beautiful Gabrielle Wang  several years ago at the Brisbane Writers’ Festival. The children in the audience were spellbound by the words of both authors and Gabrielle didn’t have enough hands for all the little girls who wanted to hold hers. Fortunately Morris gave me some warning about how the session would end. He jumped up and sprinted for the door to beat the kids to the signing table. I had to try to stop them running out after him. Luckily I had spent a number of years as a teacher so was able to summon my latent teacher authority. His queue then and now rivals that of Andy Griffiths‘.

Gleitzman prefers to describe his books about the holocaust, which begin with Once (Viking, Penguin), as a ‘family’ rather than ‘series’ of books. When Once was published in 2005 I wrote teacher notes about it here. http://www1.curriculum.edu.au/rel/history/book.php?catrelid=1877 Each book is characterised by an inimitable structure where every chapter begins with the book’s title, such as ‘Once’, ‘Then’, ‘After’, ‘Now’ and ‘Soon’ and each book also begins and ends with this word. Now breaks the chronological pattern by being set in present-day Australia with Felix as an old man.

I reviewed After for the Weekend Australian in 2012 and said: ‘After takes the reader back to Felix’s trials during the war, at first to the underground hole which was his home for the past two years. When Felix leaves it to rescue his benefactor, Gabriek, what dangers will threaten him? … The effect of war and trauma on children and young people can be horrific and should not be underestimated. Stories about these issues can provide opportunities for characters such as Felix … to play out their roles and show readers how goodness can be kept alive to help mend broken places and people. Damaged young figures move forward with hope in books of this calibre and, ideally, will not remain broken.’ 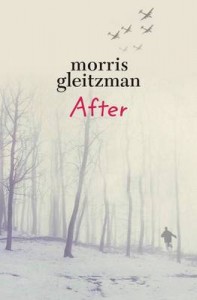 Most of the books show Felix as a boy evading the Nazis. In the latest title, Soon, he is 13-years-old and the war is over. But it’s not. Many people are still treating others without compassion; injuring and killing them in ways they wouldn’t treat animals.

Felix is surviving in a hideout with his former rescuer Gabriek. He is forced to confront more atrocities of war and its after-effects despite his work as a child doctor, innate goodness and belief in humanity. Soon is a strong anti-war cry. It is so harrowing that I would recommend it for young adults rather than primary school children. It is dedicated to ‘the children who had no hope’. Gleitzman alerts us to evil but ultimately does give us hope in these important books.