R. A. Spratt and I share a dubious childhood secret. We were both mad for Trixie Belden. I’m busting another secret; there’s a new super-youth-sleuth in town and she goes by the name of Friday Barnes. And now, I’m going a bit mad for her. 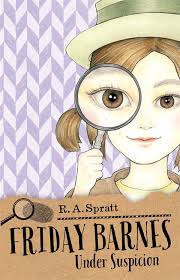 Spratt’s latest series of detective stories exploded onto the shelves of this generation’s mystery-hungry youth last July with, Friday Barnes Girl Detective. Friday continues to dazzle, in her trademark non-conspicuous way in the second of the series, Under Suspicion, released last month.

Friday Barnes is a complex high thinking, self-assured, crime-solving obsessed eleven-year-old whose powers of observation and logic are nothing short of mind blogging.

She assumes an almost orphan-like persona hailing from a large family of over-achieving scientists, but does not allow her intellectual lineage to hinder her career ambitions; to become an ace detective.

I adore the winning marriage of tongue-in-cheek comedy with surprise packed, interlinking mini mysteries. Spratt never shies away from using occasional highbrow language and concepts; instead, she flatters the reading prowess of her tween / teen audience and rewards them with intelligent character driven dialogue and seriously funny storylines.

You need not be a girl, a Trixie Belden nut, or even a ten-year-old to enjoy these books. I can’t wait to read the next one, Big Trouble. Friday Barnes has everything; snooty boarding school bullies, romance, crime and more intriguing characters and plot twists than you can focus a magnifying glass on.

Today I uncover some scintillating snippets about the award-winning author and comedy writer behind the Girl Detective, R. A. Spratt.

Welcome to the draft table R. A.Who is R. A. Spratt? Describe your writerly self.

I am the author of the ‘Friday Barnes’ and ‘Nanny Piggins’ series. I’m pretty much the cliché of what you would imagine an author to be like. I’m scruffy, I don’t get out much, I’m forgetful, and I spend a lot of time scowling at the floor while my brain is lost in thought. I can also get suddenly very enthusiastic about an idea and I use lots of dramatic hand gestures when I talk.

Tell us one thing about yourself we are not likely to find on a web site.

I don’t like wearing proper shoes. I’m more comfortable in ugg boots or crocs. Sometimes when I do school visits and I have to wear proper grown-up shoes, my feet get all claustrophobic and I can’t bear it, so I have to ask the audience if it’s alright if I take my shoes off.

What’s the most appealing aspect of writing for kids for you?

I can be sillier. I don’t have to deal with ‘adult themes’ most of which are horrible (violent) or icky (involve kissing, or worse).

Your work is filled with hilarious one-liners and sassy word play. How important is it for you to include comedy in your writing? Does it come naturally or is it something you consciously strive hard to achieve?

It’s not something I think about much. It’s just the way my brain works. I would certainly hate to write a serious book, or one of those heart-breakingly tragic ones. There is enough seriousness and heartbreak in real life. I like to focus on more important things – making readers giggle. 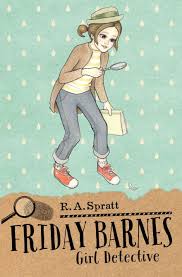 With her intellectual wit and dysfunctional academia background, Friday Barnes is an 11-year-old to be reckoned with. What was your motivation for creating such a memorable, vividly unique sleuthing character?

Friday is influenced by a lot of different fictional characters and real life people. I went to a selective high school and when I was eleven I knew a lot of super-bright dysfunctional eleven year olds.

I love the cliffhanger endings in each book. How do you conjure up so many complex mysteries and determine how they will fit into each book? Do you ever lose track and wish Friday was there to help you?

I get a sheet of cardboard, lay it on the coffee table in my office and draw a circle to represent the arc of the entire book. Next I draw a line across the top quarter to represent the act breaks, and then I start filling in plot points. I will often have a lot of plot points already worked out and written down on post-it notes. So the circle gets filled in with hand written notes and post-its until the whole sheet of cardboard is a dense mass of spidery hand writing. I don’t lose track of things but as the plot evolves, there are a lot of red herrings and clues that get woven through during the editing process. It can get complicated, especially if I cut a chapter out, I have to make sure that any clues or red herrings in that chapter are put in somewhere else.

Are we likely to see Friday remain at Highcrest Academy and progress to even higher realms of detective distinction in the same way Harry Potter grew and matured with his readers?

I’m not sure. I’m thinking she will go up into year 8 at the beginning of the 5th book, if there is a fifth book. I’ve got a lot of ideas for books 4 and 5 I guess we’ll have to wait and see how things pan out. Often times the characters seem to decide these things for themselves while you’re writing. 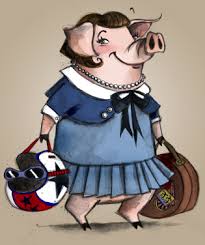 What’s on the draft table for R. A. Spratt?

I start writing Friday Barnes 4 next week. I’m finishing up writing a spec film script based on ‘The Adventures of Nanny Piggins’.

Just for fun question (there’s always one), if you were 11 again and had a choice of which school (fictional or otherwise) you could attend, where would you go and why?

I did not enjoy high school much at all. I’d rather not go back there. So if I were eleven again, I’d like to go right back in time to 1895 and be educated by a governess. Specifically Miss Prism, the governess from ‘The Importance of Being Earnest’. She was a silly woman who napped a lot and enjoyed romance novels. So she was much like me.

Thanks R. A. It’s been fun discovering you.

Dozens of lucky Queensland children will get a chance to meet Friday’s creator this month when she appears at one of SE Queensland’s biggest school literary festivals, the Somerset Celebration of Literature Festival. Be sure to bring along your silly sleuthing hats.