Abdi was a happy-go-lucky, soccer-playing fifteen year old when Somalia’s vicious civil war hit Mogadishu and his world fell apart.  Effectively an orphan, he fled with some sixty others, heading to Kenya.  The journey was perilous, as they faced violence, death squads and starvation. After three months, they arrived at a refugee camp in Kenya. Of the group Abdi had set out with, only a handful had made it to safety.

But as soon as he arrived at the camp, Abdi knew that the only refuge it could provide was death. Abandoned by the UNHCR because the area was too 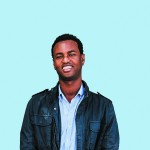 dangerous, the camp ‘housed’ thousands of sick and starving people waiting to die.  All alone in the world and desperate to find his family, Abdi turned around and undertook the dangerous journey back to Mogadishu. But the search was fruitless, and eventually he made his way – alone, with no money in his pockets, completely dependent on his quick wits and the kindness of strangers – to Romania, then to Germany.  Abdi was just seventeen when he arrived in Melbourne with no English, no family or friends, no money, no home.

Against all odds, this boy not only survived but thrived. Abdi went on to attend high school and later university. He became a youth worker, was acknowledged with the 2007 Victorian Refugee Recognition Award and was featured in the SBS second series of Go Back to Where You Came From.

Abdi’s story is one of hardship and struggle, but also of courage, resilience and heart-warming optimism. Shining is a feel good memoir that will move you to tears, exhilarate you, and at times, against the odds, make you laugh out loud. Abdi, the boy who never lost hope, offers the gift of his tale to readers who want to believe that miracles still happen.