Assimilating history into a palatable, meaningful tale for today’s children is no easy thing. Get it wrong and you risk children shunning not only a potentially great read, but learning about periods of our past that explain the character of our future as a people and a nation. A situation of unquestionable adversity, yet adversity has many advantages – ‘sweet are the uses of adversity’ after all. Get it right, and children will embrace history with gusto and every ounce of the here and now vigour that defines childhood.

Sheryl Gwyther’s ability to immerse young readers into worlds of yesteryear with such a clear strong presence of today is exemplary. Her narrative slides along as alluringly as a sweet mountain brook, mesmerizing readers with plenty of action and emotion. Sweet Adversity is exactly the type of book my 12-year-old-self would have lapped up with unbridled zeal, especially as it acquaints children with the wondrous words of Shakespeare, some of which adult readers will connect with of course, but which provide a beautiful rich new seam of learning for tweens.

END_OF_DOCUMENT_TOKEN_TO_BE_REPLACED 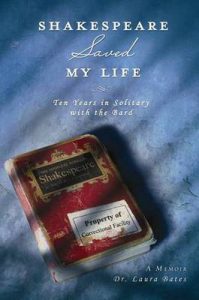 I’m more than slightly hesitant to admit that I’ve never really liked Shakespeare. Mostly for the same reasons I don’t really like poetry—there is greater depth and elaboration that requires the brains and requisite patience I don’t possess in order to unpack the prose.

So it unsurprisingly took having Shakespeare Saved My Life recommended to me a few times before I finally picked up a copy. What finally sold me on reading the book was that it was about an academic’s life-changing in-prison teaching program. That’s something I’m definitely interested in.

I’ll preface this blog with the spoiler that even after reading this book—good though it was—I still don’t really like Shakespeare. But I do have a vastly greater appreciate of his—or her, depending on which ‘who actually was Shakespeare?’ theory you adhere to—prowess.

I also have an appreciation for—or rather despair of—prison systems around the world. Rehabilitation and educational opportunities are crucial, but unpopular with taxpayers, so programs like Laura Bates’ are few, far between, and constantly up against the wall.

Apart from having to navigate massive university teaching loads as a junior academic not yet able to secure tenure, Bates had to navigate prison bureaucracy and puzzlement. The Shakespeare-teaching program was actually the first of its kind, so Bates had to undergo standard prison guard training to learn to handle situations lest she find herself smack bang in the middle of a riot. If she wanted in, she was essentially told, she could have in, but the prison guards were unlikely to be able to or even have time to get to her if or when things went south.

And, as she wrote: ‘I quickly learned that it wasn’t the noisy ranges but the quiet ones—eerily quiet—that I needed to worry about.’

‘Female on the range!’ was the primary catcall in her initial visits. Over time, though, that changed to the more accepting ‘Shakespeare on the range!’

That’s not to say things went entirely smoothly. The term ‘gunned down’ referred to bullets of liquid-y products like urine, semen, and faeces. And there was plenty of bureaucratic farce, not least relating to the bulletproof vests the guards and Bates were instructed to wear to ‘protect’ them. As one guard said: ‘If we fall over in them things, we’re like a turtle on his back. [Freaking] dumbasses in Central Office!’

But I’m getting ahead of myself.

Shakespeare Saved My Life centres around Bates, a newbie academic who stumbles across the power of teaching Shakespeare to prisoners. On the prisoners’ part they, despite the apparent chasm of time and life experience between them and Shakespeare’s tales, are able to relate to and learn from the texts.

They’re also able to translate the texts into terms even I can digest. Take, for example, this foreword to Hamlet: ‘Tell me if this has ever happened to you: Your uncle kills your father and marries your mother as he steals your inheritance. Your good friends try to trick you into your grave, but you trick them into theirs instead…When it’s all said and done, you kill your crazy girl’s brother and he kills you—but not before you finally kill your uncle. It was a rough month, to say the least.’

The star pupil and inmate is Newton, who is as intelligent as his moniker suggests. He’s also apparently the rotten-est of rotten eggs. When Bates met him, Newton had spent a record 10 years in ‘the SHU’ (read: isolation). But upon reading his thoughtful text interpretations, Bates quickly went from ‘I can’t work with this one’ to ‘there’s something incredible about him’.

‘It seems like you can spend time on just about each passage and come up with three different conclusions,’ Newton says at one stage. Hear hear. Although in my case, it’s more likely that I struggle to come up with a single interpretation of any given passage.

His insights into Shakespeare are simultaneously greater than any I’ve ever previously encountered and also more linked to real-life. He also absolutely adores Shakespeare: ‘When it comes to literature, Shakespeare is the equivalent to 2-Pac in the rap industry, Led Zeppelin in the rock industry, Michael Jordan in the world of basketball, or Muhammad Ali in the world of boxing. He is the man!’

I can’t say I’ll ever feel smart enough to like Shakespeare, but I heard myself going ‘huh’ a few times while reading Newton’s insights into them. If that’s the closest I’ll get to accessing, understanding, and actually enjoying Shakespeare, then it’s A-Ok with me. And if Shakespeare is helping people who are incarcerated, and therefore helping rehabilitate them ready for release into the community, then it’s doubly A-Ok so. New Boy is Tracy Chevalier’s contribution to the Hogarth Shakespeare series which aims to re-interpret some of Shakespeare’s more popular works. So far the series has included retellings from bestselling authors Jeanette Winterson, Anne Tyler, Margaret Atwood and Ian McEwan. I have been thoroughly enjoying this series and I have been particularly looking forward to Tracy’s reinterpretation of Othello.

It is Washington DC during the 1970’s. Tracy transports us back into Primary school – year 6 to be exact. That awkward time when you are on the cusp of growing out of the friendships and alliances that have sustained you through your younger years. Fumbling attempts at relationships cause extra tensions and alliances are forged and broken with ease.

Osei Kokote is the new kid in school. It is not the first time he has been in this position. As a Diplomat’s son he has changed school regularly and feels like experience has given him a good grasp of how to survive the first day at a new school. He is also quite adept at dealing with being the only black kid in a predominantly white environment.

Dee Benedetti is the teacher’s pet. A good girl and rule-follower who is generally liked by her classmates and the school as a whole. Drawn to the new boy, she makes the brave and startling decision to befriend him unknowingly upsetting the chain of power in the playground and setting off a series of events that will end in disaster. As the children manipulate, use and betray each other over the course of the school day the tension grows drawing the adults, who should be immune, into the web as well.

Tracy Chevalier’s decision to place the drama of Othello ín a schoolyard is pure genius. The compounding of racing hormones, changing power dynamics and racism is a potent mix. I was completely drawn into the drama and taken straight back to the playground. To take a story so well known and make it so new, horrifying and powerful is an accomplishment. Even though I was prepared for things to not end well, New Boy left me shocked and gasping. This is going to be one of my top 5 books this year and I think New Boy easily outshines the other titles in the Hogarth Series.