I’ve lost count of the number of times I’ve mentioned The Secret History in this past year, including on this very blog. I’ve pondered whether to re-read or not to re-read (that was the question). I’ve also talked about discovering that my favourite black-covered copy was missing and how this discovery was, in part, what led me to a no-more-loaning-out-of-books Scrooge-like snap. And, on various occasions and for various reasons, I’ve talked about the book in many a face-to-face and Facebook-enacted discussion.

While I’m normally wary of re-visiting already read books, I felt compelled to break this rule with The Secret History for a few reasons:

1. Although I remembered that I loved, loved, loved this book, I am ashamed to admit that I couldn’t actually remember much except that there were four students at a college, they were studying Latin, and the character called Bunny dies.

Those of you who haven’t yet read it can relax—I didn’t ruin the punchline; the book opens with Bunny’s death. Sadly, though, the Bunny part was the only part I got right. There were six students, not four—Henry, Francis, Charles, Camilla, Bunny, and Richard, with the latter being the narrator. They were actually studying Ancient Greek (with a wee bit of Latin thrown in) at a university at Vermont, and none of the characters are quite what they seem.

2. I kept waxing lyrical about how profound and amazing and, like, life-changing this book was for me, and recommending that—nay, imploring—friends who hadn’t yet read it to go out and do so immediately (note that I didn’t offer to loan them my copy, which I’d begrudgingly bought to replace the missing one).

Yet in spite of these strong commendations, I couldn’t actually recall any of the profound-ness of the prose. It was elusive and, as I recalled, depressingly clever in both a cultural reference sense and in a complexity of the understanding of language and human nature. The more I thought about it, the more I worried that it was too clever, to the point of, well, literary wankery.

Indeed, the revisit read reminded me of just how smart Donna Tartt, the author, is. And how intimidating it was to know that this was her first book. Her mastery of the Greek and the seamlessness with which she paints and fleshes out highly intelligent, sometimes-likeable, sometimes-abhorrent characters, and then deftly has their storylines overlap with devastating and gripping consequences is breathtaking. The Secret History is a brilliant piece of fiction and my initial obsession with it was accurate, but I now also realise that its denseness and intellectual bent means that it’s not a book I could read to a casual reader.

I discovered The Secret History when it was either set on a university course I took or was listed as a strong writing influence by a guest lecturer and writer whom I greatly admired. While my memory of precisely how I came to buy it is a little hazy, I know that once I had the book in my hands, I simply devoured it. My friend Carody had it recommended to her while she was studying in London by a friend who described it as the kind of book you’d be so engrossed in you’d miss your tube stop. It’s an incredibly apt description, and quite fitting that it’s also available in the $10 Penguin Modern Classic format, which was devised by Sir Allen Lane while waiting for a train. 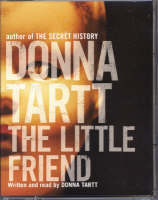 3. The final reason I re-read The Secret History is because it didn’t make sense to me that two books by the same author could be so vastly different in readability, engagement, and critical and commercial success. The Secret History is upheld and applauded by everyone who’s encountered it. The Little Friend, Tartt’s follow-up and only other book, is universally deplored. I can’t tell you what the storyline is because I couldn’t get through the book; nor could anyone else I know. It was panned by critics and lay readers alike, I guess, partly because it’s rubbish, and partly because The Secret History raised our expectations of Tartt’s writing prowess to unrepeatable, nosebleed-high heights. Hers was Second Book Syndrome on steroids.

There were something like 10 years between publication of The Secret History and The Little Friend and we haven’t read hide nor hair from Tartt since the latter bombed. I don’t know whether she’s working on something new or whether she’s retreated to lick her wounds (I suspect a little of both), but I don’t expect to see much from her any time soon.

Now, though I’ve resolved whether The Secret History is as good as I remember it (however hazily) to be, the question that remains is whether it’s better to be a one-book wonder or to publish more decent-but-not-exceptional books regularly? Harper Lee only ever published one book, the outstanding and groundbreaking To Kill A Mockingbird. Tartt’s tried a second and failed. Will she try a third? And if so, will it be third time (as) lucky (and stellar as the first)?

Stand that fact next to the bucket loads of books published annually around the world, and that there are bucket loads more that were published before I was born, and I’m realising that I’ll never be able to read all the books I want to in this lifetime. It’s with this in mind that I feel as though I’m cheating myself and as-yet un-read books each time I consider revisiting a book.

A friend once told me that books should be treated like ex-partners—it was fun while it lasted, but you can never go back. Things are never as good as the second time around, he said, and that short-lived comfort of returning to what you know is replaced by long-term dislike as previously unnoticed or unacknowledged flaws stampede you.

When I put this to some friends via those handy crowd-sourcing tools called text messages and Facebook, the response was varied. One friend was adamant that he’d never re-read a book, but the rest sat somewhere in the middle.

Two friends said they went back to books in preparation for future releases in a series: if you like, a re-read refresher. One (also named Fiona) said she re-read books if they were so good that she read them ‘too quickly’ the first time around, before acknowledging that her busy life meant that the books needed to be pretty special in order for her to do so.

Mardi said that ‘the really good ones are worth a second going over’, before adding: ‘Now I’m married, I only apply that rule to books!’ For other friends, like Amber, the quality of the book made the difference: ‘Lit fic ones where the prose is just gorgeous are long-term relationships. Mysteries or thrillers are one-night stands: once you know whodunit, it’s over.’

Others said that they will re-read books if a long, long time has passed, which arguably renders the book brand, spanking new. Such revisits help you ‘discover things you missed the first time around’, but can be, as Carody noted, a double-edged sword: ‘When I re-read Cloud Atlas by David Mitchell, it wasn’t as awesome as I remembered it being, which made me sad.’

She has, she says, ‘been meaning to re-read The Catcher in the Rye for, oh, ten years’, but wonders whether she will still love Holden Caulfield, ‘Or will I now want to punch him in the face to stop his adolescent whining?’

I’m facing similar issues myself, having noticed that my copy of Donna Tartt’s The Secret History was missing from my shelf. No one owned up, much less returned it, and my brother is again under suspicion. I then noticed that The Secret History is now available for less that $10 as a Penguin Modern Classic, which meant I had to replace it. It’s now sitting on my shelf, orange spine uncracked.

I overwhelmingly want to re-read The Secret History, although in truth my memory of the book is fairly hazy—something about students at a college studying Latin, a murder, and a character called Bunny—and I’m terrified that Tartt’s masterpiece won’t stand up the second time around. I mean, I already suffered trying to read the book she produced through her second book syndrome: The Little Friend. I’m not sure what state I’d be in if her first book too was revealed to be a clunker.

My friend Katy took the ex-partner analogy to a new (and potentially unpublishable in this family forum) level, saying that there are too many fish in the sea and that life is too short to go back. But she did make me think about experiencing books in a different format. She says she wouldn’t re-read Stieg Larsson’s Millennium Trilogy, but she did listen to them as audio books after she finished the paperbacks. I guess it’s not dissimilar to seeing the book turned into a film and, as I’ve previously noted, I’m fairly ok with that.

So should I be a re-reader? Or should I cut all ties to a book, as with an ex, once it’s over? I’m honestly still undecided. Perhaps revisiting The Secret History will help me make up my mind…