“It’s a treasure trove. It’s previously unknown, candid images of troops just out of the line. Men with the fear and experiences of battle written on their faces.” – General Peter Cosgrove, AC MC, Former Chief of the Defence Force 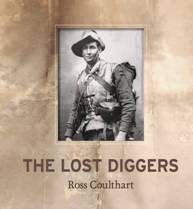 During the First World War, thousands of Aussie diggers and other Allied troops passed through the small French town of Vignacourt, two hours north of Paris. Many of them had their photographs taken by Louis and Antoinette Thuillier as souvenirs while they enjoyed a brief respite from the carnage of the Western Front.

For all too many of those soldiers, this was their last moment away from the lines before being sent to their deaths in battles that are now part of the mythology of Australian nationhood – Pozieres, Bullecourt, the mud and blood of the Somme. The weariness and horror of battle is reflected in their eyes, but the photos also capture a sense of camaraderie, high spirits and even a soupçon of romance.

The Lost Diggers is the riveting detective story of the hunt across northern France for a rumoured treasure trove of antique glass photographic plates that led investigative journalist Ross Coulthart to an ancient metal chest in a dusty attic in a small farmhouse.

The nearly 4000 glass plates he and his team from Channel 7’s Sunday Night discovered are being hailed by experts as one of the most important First World War discoveries ever made.

But that was just the beginning. With meticulous research and the help of descendants, Ross Coulthart has been able to discover the stories behind many of the photos, of which more than 330 appear in the book.

Part thriller, part family history and part national archive, The Lost Diggers brings together these wonderful images and the amazing stories behind them. “I think these photographs rank up there with one of the most important discoveries from the First World War.” Ashley Ekins, head of Military History, Australian War Memorial, Canberra

Part of the team on Channel 7’s Sunday Night, Ross Coulhart is one of Australia’s foremost investigative journalists. He’s won a Logie and five Walkley journalism awards including the Gold Walkley. Ross has previously reported for Four Corners, Sixty Minutes and The Sydney Morning Herald, and is the author of two previous bestsellers

Books Alive, an Australian Government initiative, aims to encourage all Australians to turn off their screens and get reading.

In choosing to purchase one of its “50 Books You Can’t Put Down”, you are eligible to receive a FREE book – either a dazzling collection of brand-new short stories by ten of Australia’s best writers, or Grug Learns to Read, a new title in the classic Australian series.

50 Books You Can’t Put Down

The Book of Rapture by Nikki Gemmell
The Slap by Christos Tsiolkas
The Lieutenant by Kate Grenville
The Rip by Robert Drewe
Dead Man Running by Ross Coulthart & Duncan McNab
The Scarecrow by Michael Connelly
Shantaram by Gregory David Roberts
Too Close to Home by Linwood Barclay
206 Bones by Kathy Reichs
Shatter by Michael Robotham
How to Break Your Own Heart by Maggie Alderson
Dear Fatty by Dawn French
The Guernsey Literary and Potato Peel Pie Society by Mary Ann Shaffer & Annie Barrows
Parky: My Autobiography by Michael Parkinson
The Greatest Show on Earth by Richard Dawkins
The Road by Cormac McCarthy
Through a Glass Darkly by Caroline Jones
Heart and Soul by Maeve Binchy
The Young Widow’s Book of Home Improvement by Virginia Lloyd
The Vanishing Act of Esme Lennox by Maggie O’Farrell
The Night My Bum Dropped by Gretel Killeen
To Love, Honour and Betray by Kathy Lette
The True Story of Butterfish by Nick Earls
Occy by Mark Occhilupo & Tim Baker
True Colours by Adam Gilchrist
A Most Wanted Man by John le Carré
A Fraction of the Whole by Steve Toltz
Australian Tragic by Jack Marx
Pacific Fury by Peter Thompson
1788 by David Hill
My God! It’s a Woman by Nancy Bird
The People’s Train by Tom Keneally
The 19th Wife by David Ebershoff
Dog Boy by Eva Hornung
The Story of Edgar Sawtelle by David Wroblewski
Wanting by Richard Flanagan
Dark Country by Bronwyn Parry
A Beautiful Place to Die by Malla Nunn
It’s All Too Much by Peter Walsh
The Host by Stephenie Meyer
Brisingr by Christopher Paolini
Finnikin of the Rock by Melina Marchetta
Eagle Day by Robert Muchamore
Robot Riot! by Andy Griffiths
Somebody’s Crying by Maureen McCarthy
Pearlie in the Park by Wendy Harmer
The Graveyard Book by Neil Gaiman
The Nixie’s Song by Tony DiTerlizzi & Holly Black
From Little Things Big Things Grow by Paul Kelly & Kev Carmody
Ten Little Fingers and Ten Little Toes by Mem Fox & Helen Oxenbury