There are few better things to come home to on a Friday night than a just-released book whose arrival you’ve been highly anticipating. Especially when what stretches before you is a rare weekend relatively free of work or social commitments. Suffice to say I did a H&R Block-style celebratory fist pump when I found Richelle Mead’s The Golden Lily, the next instalment of the Bloodlines breakout series, in my neighbours’ postbox.

I don’t make a habit of rustling through my neighbours’ mail, but I had already pestered Boomerang Books to find out when the book had been shipped and precisely how far away it was from me. When my postbox was empty by my neighbours’ was suspiciously full with a package identical to Boomerang Books’ usual ones, well, I had to check the name (the lid was raised, I promise). And just as well I did: clearly my postie can’t decipher the difference between apartments ‘2’ and ‘3’.

Being a new release, it was at the time I pre-ordered it, much to my chagrin only available as a hardcover, but I swiftly removed the dust cover and settled in to read. It took me fewer than 24 hours to read The Golden Lily, and that includes me sleeping for a solid eight—Mead writes the kind of books that see you read at a greedy sprint.

Now, a few days on and sad that I’m yet again Vampire Academy book-less, I’ve mixed emotions about The Golden Lily. I loved it because it was a continuation of the series and I’d have given (and would continue to give) anything to meet any of the characters again. But I hated it in that I think it fell short of what it could and should have been.

Mead dedicates The Golden Lily to ‘her beautiful son, who was born the day I finished this’. On one level that’s sweet. On another—and hold the hate mail—methinks she rushed the book in order to beat the nine-month deadline and skipped the rewrites. That or she’s so mega successful and famous she, like JK Rowling and Stephenie Meyer before her, got to avoid or override the editing process.

Don’t get me wrong: The Golden Lily is good. Sydney’s a fabulous character and I’m pleased we get to tangentially find out my about her. Adrian too is a fantastically complex vampire initially cast as the drunken bad boy but who is, as time and storylines allow him to grow, actually smarter, more sensitive, and much more lovable than his early Vampire Academy encounters suggest.

But it’s good in the way that’s familiar and in no way surprising and challenging—as in none of the things we’ve come to expect. Worse, it’s predictable, formulaic, and pretty much a carbon copy of the first book. No really, without ruining it for you, I swear it’s pretty much the same story with a couple of names changed—I saw the plot twist that’s so blindingly obvious that it can’t be counted as a plot twist coming before possibly even Mead did.

The book follows on chronologically from the first book, i.e. Sydney, Jill, Adrian, and Eddie are still undercover at boarding school in Palm Springs as they aim to keep Jill safe from the Moroi who’d have her killed in order to oust Lissa as queen. To recap: there’s a quirk in the law that says a royal has to have a living relative in order to hold the throne—Lissa’s too well guarded to knock off, so Jill’s become the target. You know, the fate of the vampire universe depends on her staying alive and safe and all that. 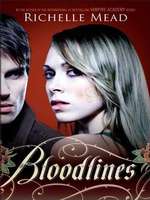 Which is why I was doubly annoyed that the most gaping plot hole of the first book still hadn’t been fixed. Shame on you, Richelle Mead, and shame on your editor too for continuing to have the character wander about unguarded for vast swathes of time in the book—it undermines the enormity of the issue of why she’s been squirreled away there in the first place.

It also undermines the always-alert, life-on-the-line premise on which Mead has developed the guardians. The entire reason why Rose and Dimitri could purportedly never 100% be together is because their lives were not their own and they ate, breathed, and rarely slept in their guardian roles.

Yet the ever-dedicated Eddie, who’s already endured his best mate dying and various other awfulities at the hands of the Strigoi, and the OCD Sydney, whose future as an Alchemist is on the line, are ok with her getting about unchaperoned?

Especially after (you may not want to read this next bit of the sentence if you haven’t read Book 1) she’s already had an evil former Strigoi date her under false pretences and an Alchemist prove he’s up to no good. If that isn’t enough to make them tighten up their security—and give Mead a face-saving way to patch up this gaping, easily fixed plot error, no less—I don’t know what is.

I guess my main gripe is that smart characters are suddenly not smart. Mead is breaking the rules she’s set up and undermining what’s integral to her characters. The things that slip past them are things that would never ever have previously slipped past in the past—Sydney, Adrian, Eddie, and Dimitri are super intelligent and would be aware of issues before they were even ones.

It’s unbelievable (and arguably lazy plotting and writing) that they’d be missing key signs or that they’d leave Jill in the hands of an entirely un-trained Dhamphir of questionable background. Dimitri alone would never allow for such lax and amateur security. Jill should have the best of the best 24/7.

Which brings me to the other issue: the continued absence of Rose and Dimitri. I know Mead said she was done with those much-loved characters, but the books are lacking without them. It’s like having Twilight without Edward and Bella—although I know there are some of you out there who’d argue that’s precisely what would improve it. Seriously, though, readers have fallen in love with the complex and compelling Rose and Dimitri and starving them of them weakens the tale.

Giving us glimpses of them is even worse. Dimitri comes to town—in fact, Mead foreshadowed that at the end of the last book so I’ve been salivating over the fact that Dimitri would reappear for close to 12 months now. Sadly, though, he might as well have not been there.

His mission is to research what prevents and un-strigoi-ed vampire from becoming re-strigoi-ed. That is, something that’s pretty important and that should see him appear more in the story. But the research goes largely nowhere and Dimitri’s contributions to the plot are cursory. Worse, the only time Rose appears is when she apparently phones Dimitri and we hear Dimitri tell her that of course it’s not a bad time to call.

But I’m being harsh. Mostly because I so love Mead’s series and characters and know she’s capable of better. And for all my grumping, I did enjoy the book and its return to wry humour. These include:

[Julia] shook her head. ‘This is the kind of shirt that says, ‘You’re never getting in here.’ Kristen then offered that ‘I think it’s more like a shirt that says, ‘I’m going to have to end this date early so I can go prepare my PowerPoint presentation.’

They all traipsed down the stairs with me when the time came for Brayden to pick me up. (Actually, it was a little earlier than the appointed time, but I hated being late.) The girls had all come up with reasons for needing to meet him, from Jill’s ‘It’s a family thing’ to Kristin’s ‘I can spot and asshole in five seconds.’ I wasn’t confident in that last one, seeing as she’d once speculated that Keith [AKA the arch nemeses of the previous Bloodlines book] might be a good catch.

Sydney comments on Dimitri wearing his ‘duster’ [AKA a trench coat] in the Palm Springs heat. ‘Isn’t Dimitri hot?’ she asks. ‘Adrian’s response hadn’t been entirely expected: “Well, yell, according to most women, at least.”’

‘No offence,’ Adrian tells her, ‘but this lily is kind of more badass than yours. If the Alchemists want to buy the rights to this and start using it, I’m willing to negotiate.’ ‘Noted,’ Sydney tells him.

Soon after he says:

‘You’re in an awfully good mood. Was there a sale at Khakis-R-Us?’

For all my harrumphing we all know I’m in for the Vampire Academy/Bloodlines long haul—the books are too good and the characters and plots too addictive for me to give up. But I will say that I hope Mead has her Google Alerts set up and that she takes note and returns (in at least some capacity) Rose and Dimitri. That and that she fixes the drive-a-truck-through-it security plot hole before Book 3.