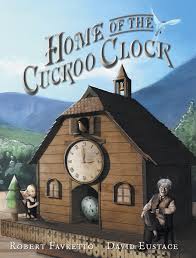 ‘There’s a sad sort of clanging from the clock in the hall and the bells in the steeple too. And up in the nursery, an absurd little bird is popping up to say, “Cuckoo, cuckoo!”’

So marks the passing of time as decreed by Rodgers and Hammerstein. Time, we often complain about its restraints and resist its ravages but to ignore it completely results in chaos. At least it does for the village of Schoenwald in Home of the Cuckoo Clock.

Home of the Cuckoo Clock is Robert Favretto’s first venture into the picture book world, one he makes with considerable assuredness and aptitude along with illustrator, David Eustace. Together they navigate the difficult yet supreme landscape of telling stories in pictures against the stunning backdrop of Germany’s Black Forest region.

Schoenwald is caught in a peculiar metaphysical time warp, in other words, frozen in time. It’s not a bad thing ignoring the passing of time however complete deprivation of any time keeping results in some devastating situations for the villagers: children are late for school, the shops do not open on time, and cows are not milked. The problem? No clocks.