Australian literature is the best. Over Christmas I’ve indulged in reading the literature for adults I can’t easily justify reading during the year (but read anyway) when I am focusing on YA and children’s lit for work – and also pleasure. I’ve been reading a mix of Australian and international fiction. I have to say that the Oz books are better. Highlights have included Trent Dalton’s Boy Swallows Universe (HarperCollins Australia), Marcus Zusak’s Bridge of Clay (Picador, Pan Macmillan, reviewed here), Gail Jones’ The Death of Noah Glass (Text Publishing) – the best literary fiction I read last year by probably my favourite writer for adults – and I have just finished Flames by Robbie Arnott.

Flames (Text Publishing) is an extraordinary debut novel. Set in Tasmania, shrouded in the gothic and macabre, it reminds me of one of my all-time favourite novels, The Sooterkin by Tom Gilling (Text Publishing). Both novels share a kinship with seals. 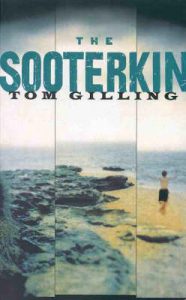 The cover is an abstract, reimagined Tasmanian wonderland, designed by the talented and charming W. H. Chong from a lithograph by Harry Kelly. It evokes both place and the elements of each chapter: Ash, Salt, Sky, Snow and Wood … Flames smoulder and taunt or empower the characters.

The tale begins with the return of Edith McAllister two days after her ashes were spread over Notley Fern Gorge. “Now her skin was carpeted by spongy, verdant moss and thin tendrils of common filmy fern. Six large fronds of tree fern had sprouted from her back and extended past her waist in a layered peacock tail of vegetation.” She is one of several McAllister women to appear after cremation, causing her grieving son Levi to commission a coffin for the eventual death of his twenty-three-year-old sister Charlotte in the hope that this will alleviate fear of her own reappearance after death.

As well as Levi’s viewpoint, the author shares the perspective of Charlotte, who escapes to remote southern Melaleuca; Karl, who bonds with a seal to hunt the Oneblood tuna (and witnesses the most harrowing and unforgettable scene in the novel); and his daughter Nicola who loves Charlotte. Other characters include the coffin-maker (whose derangement is largely shown through his letters to Levi); the “Esk God” water rat; the farm manager who cares for the wombats; the gin-swilling female private investigator and the enigmatic Jack McAllister. The entwined lives of these characters are skilfully explored.

The setting will be familiar – and not – to those who know the Tasmanian landscape. Place is wrought superbly. Images are unique and expressionistic. Flames are volatile.

Flames has deservedly been shortlisted for the Victorian Premier’s Literary Awards fiction prize, alongside The Death of Noah Glass. Australian literature is flourishing.