Imagine if dinosaurs lived today in Australia. As we know, dinosaurs did live in Australia, some on the Kimberley coast of northwest Australia, and their footprints are still visible there. In Return of the Dinosaurs (Magabala Books) Nyiyaparli and Yindijibarndi descendant Bronwyn Houston wonders what it would be like if dinosaurs roamed around Broome today.

As a girl the author-illustrator played at the beach with her brother and found footprints that turned out to be those of sauropods. In this picture book, she has created the surrounds of Broome in vibrant, inviting illustrations. Her characters – human and dinosaur – visit the rocks at high tide, play with humpback whales, meet their prehistoric crocodile cousins in the mangroves, feast on salmon, hunt for bush tucker, play at Cable Beach and enjoy the outdoor movie screen at Sun Pictures.

Brachiosaurus, Ceratosaurus, Megalosauropus, Broomensis, Parasaurolophus and Stegosaurus are included in the narrative and humans are sometimes shown in the illustrations to provide scale. Young readers will find this well conceived and executed book captivating. Bronwyn Houston’s other new book is a board book for very young children, Animals in My Garden (Magabala Books). It is a simple counting book, “1 one snake … 2 two kookaburras … 3 three lizards” and so on up to “10 ten mosquitoes”. Each numeral and accompanying creature is showcased on one page.

The animals can be found in Australian backyards and the illustrations are extremely appealing: bright, textured and inviting children into nature. Another new Magabala Books’ publication for young readers is a second board book, Cheeky Animals by Shane Morgan. This book is inspired by Shane Morgan’s book Look and See, which was first published in 1999 and is still in print. This is testament to the synergy between the clear, often ochre-coloured illustrations and the simple appealing written text, “Look at the lizard, he’s up in the tree. See the big lizard. He’s looking down at me … Look at the turtle walking so slow. See the turtle, he stood on my toe.”

Shane Morgan is a descendant of the Yorta Yorta peoples of Victoria. Cheeky Animals’ appeal as a board book for the very young culminates in its ‘bedtime’ ending, “Look at the dingo howling with might. See the dingo, he’s saying goodnight.” 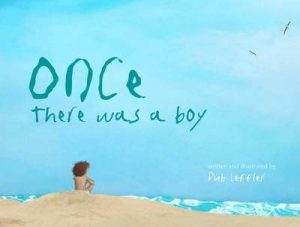 Some of my other favourite picture books published by Broome-based Indigenous publisher, Magabala Books are Once There Was a Boy by Dub Leffler (simply beautiful), Mad Magpie by Gregg Dreise and Our World Bardi Jaawi by One Arm Point Remote Community School.