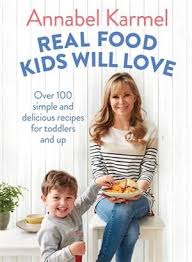 There is absolutely no need to panic this Christmas. Books make great gift ideas in case you didn’t already realise because just about every taste is satisfied between the covers of a book. Today’s, non-fiction title is a book that kids and adults alike will find an absolute treat. Cooking is a perennial, not to mention essential favourite pastime. Cookbooks make fine additions to any Christmas gift list with the dual bonus of practical functionality coupled with luscious beauty – I adore pouring over food photos for inspiration. Have a look at my new favourite…

English author, food pioneer and mother of three, Annabel Karmel has added another title to her long list of enticing family-orientated cookery books. This one featuring ‘over 100 simple and delicious recipes for toddlers and up’ is a standout crowd pleaser. I am not normally overly enthused by cookbooks for kids, often finding the recipes too diluted or dumbed down and whilst straightforward enough for little chefs, woefully lacking in imagination and taste.

Real Food Kids Will Love is a truly delectable exception! And it delivers exactly what the title promises.

END_OF_DOCUMENT_TOKEN_TO_BE_REPLACED Increasing numbers of Australians are living in apartments and fewer and fewer of us have yards in which to grow vegies or herbs. Worse, most of us have lost or never known produce-growing know-how.

I comprehensively count myself in the latter group. I never learnt the basics of growing things—soil prep, climate suitability, seasonal produce stuff, and more—and I make growing anything far, far harder than it should be. I also realise buying things like herbs, which can be grown in small spaces, is a giant waste of money.

Released on 1 May (just in time for Mother’s Day), Courtyard Kitchen contains growing tips for herbs and potted fruits, then segue into recipes to use that produce. That is, the kind of fundamentals for people like me.

That’s both beautiful as in the shots but also their styling. They’re the kind of pics that encourage even the blackest thumbs of us to give growing herbs one more go and inspire us to whip up some delicious meals once those herbs have grown.

Containing tips about such things as preparing soil, planting, watering, managing pests and disease, which pots to plant in, and how to go about sterilising bottles and jars for things like pestos, the book contains plenty of information that, while practical and basic, is perfect for those of us needing to start from scratch. (The also layout comes complete with super-cute callout circles with handy hints inside them.)

Primarily a cookbook with some herb-growing tips at the start, Courtyard Kitchen caters mostly to omnivores, but offers a number of vegie options. The recipes are grouped by the herb they most feature. For example, Chocolate Basil Cake and Basil Pizza fall, as the titles suggest, under the Basil section; Rosemary Potato Wedges fall under Rosemary.

The recipes range also from Chili Vegie Tagine to Thyme Dumplings to Celeriac & Potato Soup and Parsley, Chilli & Lemon Spaghetti. All tasty options to experiment with and from which to derive a sense of ‘I grew this, I cooked this’ satisfaction. Not-so-green thumbs up.

Thanks to Murdoch Books for the review opportunity.

Use the promo code “cookthebooks” and get FREE postage.
Offer ends 27th October

Winter is almost upon us, and as the days grow darker and the nights become cooler, my mind turns to comfort food from my slow cooker.  Anyone with me? It’s time to pull out your slow cooker from the back of the cupboard, box or garage and begin to look forward to some delicious meals.  Slow cookers are a fabulous time-saving appliance, and there’s nothing better than coming home from a busy day out to a delicious concoction cooking away on your bench top.

Now, if you’re anything like me you’ll have your tried and true favourites (lamb shanks, beef hot pot) but I’ve pulled together a collection of Australian books for you to spice up your repertoire.  The best thing about this collection is that each of these books have been selected from the Boomerang Books list of Australia’s Top 1000 Bestselling Books, which means you can enjoy an additional 20% off the RRP. If 250 recipes isn’t enough, try the The 1000 Recipe Collection – Slow Cooking, which has (as the title suggests) an astonishing 1000 recipes to choose from.  Getting hungry?

The Complete Slow Cooker By Sally Wise is a combination of two of her previous slow cooker books and is appropriately jam packed full of great recipes.  If you’re looking for ideas for delicious and nutritious meals from an experienced cook, you can’t go past The Complete Slow Cooker by Sally Wise.  According to the publisher, Sally Wise is the: “best known, best loved and the biggest selling author of books on slow cooking,” so you really can’t go wrong with this one. Let me know if you’re a slow cooker devotee, and if you have a favourite recipe you’d like to share with us.

If you’re still hungry for more, check out Slow Cooking By Hinkler Books.