Attributed as ‘a class act’ by The Australian. 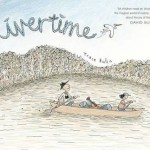 Her previous title in the series, Rivertime (review), is the winner of several book prizes, including the Readings Children’s Book Prize, the Wilderness Society’s Environment Award, and shortlisted in the CBCA Awards, NSW Premier’s Literary Awards and Speech Pathology Australia Awards. Author illustrator Trace Balla has moved us once more with her new graphic, enchanting mountain adventure novel in Rockhopping.

With its sheer gravitational pull, Rockhopping takes its readers to gripping heights (and depths as it turns out!). You’ll discover moments of both unexpected intensity and serendipitous tranquility. Any primary school kid, or adult, excited by the possibilities of a hike through nature (particularly of the more challenging kind), and also those open to fortuitous opportunities won’t be disappointed by this symbolic quest. Clancy and his happy-go-lucky Uncle Egg spontaneously plan another camping trip following the success of their last one canoeing on the Glenelg River. Their aim is to find the source of the river. But Uncle Egg knows it won’t be easy so he ensures Clancy is trained and prepared weeks ahead of their journey. Backpacks full of supplies in tow, the pair begin their climb at the side of the Gariwerd (the Grampians) mountain range. Their time trekking around the rocks comes with not only physical, but emotional, strains. Using all their resources they find strength, willpower, companionship and loyalty to face and overcome the setbacks (including a rigorous endurance test by Uncle Egg to rescue Clancy, and his backpack, from a fall into a ravine). But at the same time they lap up the chances to appreciate each other and the wonder and beauty of the creatures and sights around them.

Trace Balla‘s text and illustrations are so child-friendly with their progressive narrative, enthralling dialogue and lively sequenced images that it makes us want to have a nature adventure of our own just to be able to document it in the same way! Her research and insights into the Victorian Range region, the Indigenous people and their history, ecologists and her own up close and personal encounters with leeches, swamps and cliffs are brilliantly intertwined into this book. Just like Clancy and Uncle Egg, Balla’s inspiration stemmed out of unforeseen travels and discoveries. Her message is so affecting: “When you stop trying to get anywhere and just be, a whole world of wonder can open up to you… The more you look the more you find out. It’s also about realising we are part of the natural world, rather than separate to it… It is a book that reminds us about being in touch with the earth.”

Rockhopping is an enriching, magical delight with endless scope for environmental, social and historical study as well as inciting self-discovery and philosophical reflections. Certainly an adventure you won’t want to miss! Up-and-comer author illustrator, Trace Balla, has quickly hit the scene with the recent success of ‘Rivertime‘, being both shortlisted in the 2015 Children’s Book Council of Australia Picture Book of the Year Awards, and winning this year’s Readings Children’s Book Prize. Her work stems from a background in art therapy, animations and community involvement, with a strong focus on environmental themes. Let’s enter the magical tales of nature, love and loss with her two books, ‘Rivertime‘ and ‘Shine’. You know a book’s going to be special when the front cover is graced with both an entrancing illustration and a testimonial by acclaimed environmentalist, David Suzuki, telling us about the delight and magic that awaits inside. I’m already loving the endpapers that greet us with a wonderfully hand-drawn menagerie of native birds at the front, and other flora and fauna at the back, all ready to be spotted along our river journey. Boxed vignettes, speech bubbles of handwritten dialogue and endearing pencil drawings form the visual and sensational adventure that we embark on with characters, ten year old Clancy and his Uncle Egg. When number-loving Clancy is finally big enough, his bird-loving uncle plans a ten-day (or 240-hour, or 14,400-minute) paddling trip along the Glenelg River, minus all the technological gadgets. At first, Clancy is grumpy, but as the days pass, so does his temperamental attitude. The pair encounter beautiful wildlife, serene views and fascinating people of the land. Clancy learns to appreciate the beauty of nature and its creatures, a few camping skills, and particularly, to conquer the jetty exit! I just adore the tranquility, including scenes of ‘timelessness’; of gentle, seemingly-infinite rivertime drifting and star gazing on double page spreads. Final pages include a map of the canoe trip on Bochara (the Glenelg River), and the author’s inspiration for the story following her own river journey, away from the modern world.

‘Rivertime‘ is a calming influence on what is normally a chaotic lifestyle for most of us. It lets us take a breath, or a few, and enjoy the Australian river ride, encouraging its readers to connect with, and hopefully strive to sustain, our unique and wonderful natural environment. Paddling up this river is a true delight; ‘oar-some’ to be explored independently and as part of a class discussion.

Download a handy pocket bird-watching guide to accompany Rivertime here.
And, look out for Trace Balla’s sequel to ‘Rivertime’; ‘Rock-hopping’. Shine; a story about saying goodbye, published by Allen & Unwin in 2015.

From an intensely raw place in her heart, Trace Balla wrote ‘Shine’ for her sister’s children after the sudden passing of their father. From the dedication page, this book takes the reader on an emotional journey, even for those who haven’t experienced loss of great magnitude.

With its heavenly, Indigenous-look line and dot paintings, and equally sentimental Dreamtime essence in the words, we are introduced to a shimmering light amongst the golden stars; a young horse called Shine. As the planets align, he meets the lovely Glitter, and together they are blessed with two little sparkles, Shimmer and Sparky. When Shine has to return to his star, the family weep golden tears that form a huge golden ocean. But this is the part that really got me… As they climb the steepest of mountains to reflect upon its beauty, Glitter explains that its vastness represents the endless and enduring love they have for Shine and for each other. Finally, it’s the brightest, most special star of all amongst the twinkling night sky that allows them a deep and beautiful sleep.

‘Shine’ is a touching story that sensitively deals with ‘saying goodbye’ in a simple, yet profound way. Trace Balla cleverly uses yellow and blue hues not only to represent the shine amongst the dark, but also as the hope and love amongst the tragedy of loss.

A metaphorical beauty for young children, with the power of everlasting love at its core.

Both these stories inspire an appreciation for every moment spent with the things that matter most in this world, and far beyond it…