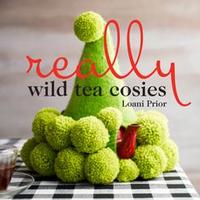 ‘Wild’ and ‘tea cosies’ aren’t exactly terms one would instinctively pair together, but not only does this irreverent pairing work, the book pairing them has been a runaway success. So successful, in fact, that Loani (pronounced Low-arni) Prior has just released her second book about knitted tea cosies. Its title? Really Wild Tea Cosies, of course.

I had the good fortune to hear Prior speak about her journey from quiet, unassuming home knitter to published author and ‘grand purl baa’ of tea cosy knitting (she puts it down to luck and sass to put her idea out there and to find an editor willing to take the chance), and I have to say that I was taken with just how self-deprecating and downright funny she is. I perhaps shouldn’t have been surprised given that her books include such designs as Carmen Miranda (yep, as is in a tea cosy covered with knitted fruitiness), green-eyed monsters, and court jester-style cosies, which come complete with tuckable, extendable, er, jester bits.

But what I was surprised by—and which would surprise most of us—is just how fondly tea cosies are regarded. Prior spoke of tea cosies that had been passed down through generations and which, while after all that time and use weren’t exactly the best looking, were far more than some wool around a pot—the tea cosies were imbued with love and treasured memories of family members and good times. Sure, she points to the fact that while women tend to use tea cosies for their intended purpose, men appear to have an inherent instinct to put tea cosies on their head. But it’s clear that the tea cosies bring joy to both sexes.

As a knitter with my training wheels on (I’ve recently joined my local Stitch ‘n Bitch group after being uber impressed by them when I visited for a story I was working on), the design skills and the knitting dexterity are something I can only at this stage aspire to. But the knitting instructions are concise and straightforward to follow and the images are both spectacular and inspiring for anyone who has mastered the not-actually-that-tricky-I’m-just-a-slow-learner knitting and purling. Part inspiration dip, part instruction manual, and part coffee table book, Really Wild Tea Cosies (and, indeed, its predecessor), is something special. Give me a week and I’ll be in the market for copies to beg, borrow, or—let’s face it—steal.