Believing in yourself when all else around you is in a state of upset and confusion is an emotion children are more than capable of recognising. Keeping the faith when adrift in turbulent seas is not only testing and difficult at times, it also determines your future perspectives on life. These next few books that touch on the importance of keeping the faith in dire times provide intense and touching lifelines to children (and adults) of all ages. Marwood is more than adept at distilling emotions into moving verse novels. Attaching emotion and memories to physical things is something humans are adept at, as well. This story deftly portrays a young boy’s heart-felt attempt to retain and simultaneously farewell everything he holds dear in his life as he and his family prepare to sell up and leave their family farm.

END_OF_DOCUMENT_TOKEN_TO_BE_REPLACED For children fortunate enough to grow up with grandparents the bonds they create can be intense and everlasting. Should something happen to their beloved grandparent(s), accepting that change whether through loss, illness or disability may be difficult to cope with. This handful of picture books celebrates the many golden moments grandparents provide invariably enriching their grandchildren’s lives whilst also gently exploring ways to cope with the inevitable experience of change.

Loss of a Grandparent 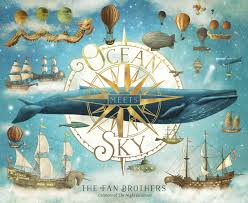 This is another glorious picture book by the gifted North American duo, Terry and Eric Fan.  Ocean Meets Sky is a sumptuously articulated story about a small boy’s way of remembering his grandfather and dealing with his passing. Suffused with heart-hugging illustrations, the simple narration, which centres on a young boy searching for his grandfather aboard a boat he built himself, escorts readers to the moon and back, cultivating hope and collecting wonderment along the way. The hardback version, embossed with gilt images, comes with a gorgeous, eye-catching dust cover which is almost reason enough to open it and venture in. Collectable and memorable, full points for this magical and reassuring reading experience.

END_OF_DOCUMENT_TOKEN_TO_BE_REPLACED 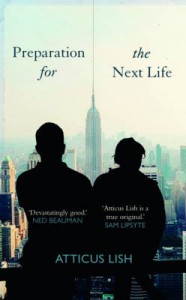 This is one of those books that immediately after you start reading you know you are in the hands of a wonderful writer. Atticus Lish has delivered a delicately savage critique on post-9/11 America and the so-called American Dream in a beautiful love story of an illegal immigrant and an American soldier recently returned from Iraq.

Zou Lei is a Chinese-Muslim who has escaped from northwest China and the wars in neighbouring Afghanistan. Alone, with barely any possessions or clothes Zou Lei is quickly set to work for long hours and small pay but is ostracized within the Chinese migrant community because of her Uighur-Chinese background. Despite this she embraces the small freedoms she now has and is determined to carve out a new life for herself despite the hardships.

Skinner is an army veteran of three tours in Iraq. Recently discharged he arrives in New York looking for a good time. Looking to find ways to forget. Skinner was “stop lost” as a soldier. Administratively lost in the system and sent back for two more tours of Iraq. When he does finally leave the Army, America itself “stop losses” him. Damaged and scarred, mentally and physically, from his service Skinner is abandoned by the country he has just served to find his own way, find himself and try to survive in the country he has returned to. Lost, confused, alone and haunted by what he has experienced the portrayal of Skinner is one of the best I have read in terms of PTSD, its effects on the individual and its affects on those around them.

Skinner and Zou Lei find each other and their relationship is unsentimental. Theirs is not a love story of passion nor is it one of forgiveness. It is certainly one of circumstance but they endure more than their situation. Skinner and Zou Lei both find in each other a glimmer of hope for a future. That together they might be able to overcome the situation they each find themselves in. Together maybe they can survive. They have found each other so therefore they might no longer be lost. But they must not lose each other or they could lose what little they have left.

Atticus Lish’s writing is sharp, exact and deliberate carrying you through the lives of these two tragic figures. You are absorbed into Skinner’s and Zou Lei’s lives and their surroundings and the sense of being lost and abandoned is beautifully evoked through disconnected dialogue and the divide that exists between both Skinner and Zou Lei’s relationship and the world around them. This is a novel that permeates through you, long after you finish it and is a truly exception debut.