The seed of creativity takes many forms. It may lie dormant, untapped, unchallenged, or temporarily forgotten  but when nurtured, wonderful things grow. This bushel of picture books not only gives young readers permission to express themselves, but also demonstrates creativity’s diverse manifestations. 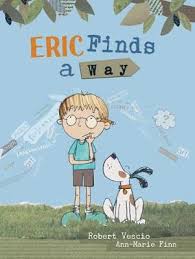 Eric loves reading and living the stories he reads about. He aspires to write and draw his own adventures but frequently stumbles over his feelings of inadequacy. Encouraged by his ever observant and patient father, Eric persists until one day he has an idea that does not require pictures and words to enable him to journey into a story. Eric’s discovery of the power of imagination and the realisation that you can express it in many different ways is a timely reminder that not all kids like leaping into storybooks to experience new adventures and travel to new places. Nor do they have to. Finn’s beguiling collage and paint illustrations are the ideal match for Vescio’s smooth clean narrative. Inspired outside-the-box-thinking for 5 – 8 –year-olds.

END_OF_DOCUMENT_TOKEN_TO_BE_REPLACED Multi-award winning author Gary Crew delivers a dark, but compelling Australian fairy tale in his latest illustrated book, The Cuckoo (Ford Street Publishing). The story follows the journey of Martin, a boy on the cusp of becoming a teenager, living in the Blue Mountains. Deserted by his mother, bullied by his brothers and neglected by his father, he seeks solace in the bush. The story is a warning against arrogance and is cleverly complemented by the intricate and surreal drawings of Naomi Turvey.

Gary Crew joins me to talk about The Cuckoo and his other recent works.

JF: Gary Crew, congratulations on the The Cuckoo. The book is ultimately a tale of forgiveness and hope, but there is a great deal of cruelty in the story. Can you explain the background to the book?

GC: Having taught Murray Bale’s novel ‘Eucalyptus’ at university, I was interested in writing an Australian Fairy Tale that would appeal to boys. The extract from Perrault’s ‘Hop o’ my Thumb’ which introduces The Cuckoo proved the perfect starting point for a Fairy Tale based on sibling rivalry and sacrifice. GC: Visual literacy is a vital element associated with negotiating the modern world, irrespective of the reader’s age, so that’s one reason; secondly, the image allows the basic print narrative to be extended into a multiplicity of personal interpretations and readings according to the reader’s unlimited imagination.

JF: Would you classify The Cuckoo as a Post Modern picture book?

GC: Yes, I think I would because it is a bit ‘off the wall’.

JF: There is a heavy focus on nature in your illustrated books – Finding Home, In the Beech Forest and The Cuckoo. Do you think your own environment – the Sunshine Coast hinterland, has played a part in that? GC: For the last 20 years, I have lived on property in the beautiful Blackall Ranges which form the Sunshine Coast Hinterland. My tiny cottage is on top of a mountain; my view is sky and forest. I can’t help but be overawed by nature’s wonders.

JF: You are Associate Professor, Creative Writing at the University of the Sunshine Coast. How does your teaching background affect the way you write?

GC: This is a great question: the guaranteed income from my university teaching allows me the freedom to innovate and experiment with my writing and publications. I can ‘push the envelope’ and affect genres. I love trying new ideas in both print and illustrative forms.

JF: Do you feel the need to educate when you write as a result of your profession?

GC: No, I don’t feel the need to educate (I don’t really like the word: it means ‘to lead…’ I’m not keen on leading!), but I do like to share my enthusiasm for the uplift that writing creatively can give. JF: After writing many books for young adults, you wrote two books for adults – The Children’s Writer and The Architecture of Song. Did this change you as a writer?

GC: As I read mostly adult literary works, the time had come for me to ‘have a go’ at writing for an older audience myself. I found a great sense of freedom in doing that.

JF: You have returned to illustrated books. What appeals to you about this genre?

GC: I read the world visually and I love the collaboration with illustrators that the genre allows me.

JF: What’s next for you – more illustrated stories, or something different?

GC: I have contracts for an historical YA novel, ‘Voicing the Dead’ with Ford St and an illustrated book with a seriously innovative ‘steam punk’ artist (Paul O’Sullivan) for ‘The Visions of Ichabod X’ (Harbour publishing). Both are for publication in 2015.

JF: Thanks for visiting, Gary and good luck with The Cuckoo.