Some of my childhood highlights as a city slicker were the infrequent visits to my Grandparents’ farm, tucked away in the volcanic hills of the Blackall Range. Learning how to milk cows and churn their cream into golden, waxy pats of butter produced a memory that prevails today, even if the skill has waned. 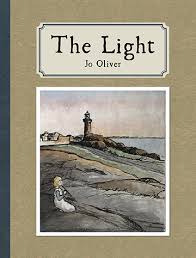 Nostalgia is something worth sharing for it preserves much more than just a time and place. It builds one’s history and shapes one’s future. Jo Oliver’s latest picture book, The Light, pays homage to the lighthouse keepers and their families of Montague Island and gives us an alluring glimpse of a time and occupation now extinct, and superseded by technology.

The cover and title intimate the story subject immediately; however it is the little girl, kneeling alone on the windswept hillside with her tin whistle which piques one’s curiosity. She introduces us to her home, her family and her life upon this seemingly barren and desolate rock in the middle of the Tasman Sea. One wonders at the lack of everything this family possess and how they endure the tedious isolation of their environment. However, Louisa or as she is affectionately referred to in the story, Lou Lou, doesn’t have time to be bored. Her days are filled with studies and chores and learning to ‘churn the butter’. Yet she still finds moments to run off and sit upon the smooth sun-kissed rocks to play her tin whistle.

In contrast to an existence that is bleak and forlorn, Lou Lou’s music represents the very essence of life pulsing within and around the island. Everything is part of the melody; the crashing waves, swaying seals and swooping terns.

Jo Oliver’s text is enhanced by her understated yet evocative paintings and sketched drawings. The vivid cerulean sea is a vibrant backdrop no matter where you look from the lighthouse. It effervesces with barely restrained beauty as Lou Lou plays her whistle.

Indeed it is the simple pleasure of music and revelling in each other’s company that binds this family inextricably together. However a sense of foreboding prevails when we learn from Lou Lou’s father that a terrible storm is on the way.

Whenever Lou Lou or her father or mother makes music, the pages are cloaked in sheet music. The effect is subtle and unobtrusive. But as the storm closes in, ominous darkness descends. The sheet music becomes muddied and less discernible. The family play on despite the howling storm outside and are soon joined by four shipwrecked men who only locate the safe haven thanks to the guiding light and later, the music. Hope is rekindled and salvation is celebrated within the warmth of shared lamplight. The subdued, muted details Oliver uses in both her story telling and illustrations are easy to appreciate in much the same way as her previous picture books Pilgrim and Tatiara. The Light won’t necessarily cause young children to leap up and want to be lighthouse keepers. Its significance lies in the gentle way it illuminates an era when manned lighthouses were a vital necessity to our maritime safety and well-being, and highlights the selfless families who operated them.

Suitable for primary aged children and big kids with lots of nostalgic memories.