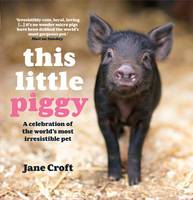 ‘Tis funny the things you learn from books. The quirky, the apparently useless but interesting trivia that stays with you long past the time you’ve finished reading them. Equally odd are the books that you wouldn’t have realised there was a market for, but that find yourself completely suckered into buying as soon as you see them. Thereby, of course, becoming part of that particular book’s buying market.

That happened to me on Friday with Jane Croft’s This Little Piggy: A celebration of the world’s most irresistible pet.

It’s a small, square book about micro pigs, which are the next big thing in so-cute-you-want-to-squeeze-them must-have pets. Often smaller than cats, dogs, and even chooks (although one of the book’s big warnings is that there’s absolutely no guarantee Babe will stay pint-sized and you might end up with a hefty heifer of a pig careering around your backyard and through your house), micro pigs are apparently smarter and cleaner than dogs. They also apparently come with in-built, highly developed fridge-raiding skills, with the author recounting the various fridge-locking devices of which her pigs have made short shrift.

Among the pig-themed facts I picked up from this impulse buy was just how large a part pigs have been in humans’ lives. No, I’m not talking about the amount of bacon omnivores consume, but that pigs have been around on every continent except for Antarctica for about 40 million years, that they’re smarter even than chimps, and that they have proved masterful adapters, which included them being the first animals ever to be successfully domesticated. As the book puts it: ‘Pigs have successfully adapted to forest, swamp, savannah, and now sofa.’

Oh, and they also have about 15,000 taste buds, which exceeds those possessed by any other animal, including humans, and have such acute smelling senses they can sniff out things underground. Like truffles.

The mini pig incarnation is the result of some clever cross-breeding (at least, I hope it is—I don’t want to know if there are some nasty genetic modifications at play). Judging from the glossy pictures full of little trotters so adorable that even Anne Geddes would be jealous, micro pigs are so weak-at-the-knees cute that the words universally emitted from anyone who sees said book are, ‘Awwww, I want one’.

Which I now do, however impractical (and subsequently useless trivia-related) it may be.