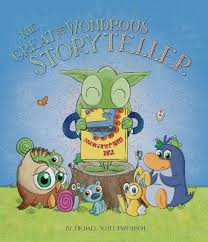 Norbert P. Winklebottom begins his wondrous journey on the front end pages of Michael Scott Parkinson’s new picture book resplendent in suit, tie, and a dazzling sense of self-confidence for he is, The Great and Wondrous Storyteller. 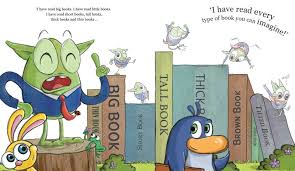 He has read books of all description, in every location from the top of cloud-clad mountains to the bottom of the deepest oceans to everyone from queens and kings to goldfish, yes! And about subjects as diverse as unicorns and dragons. With qualifications like these difficult to pass over, Norbert’s friends entreat him to read them a story.

Now, this is where Norbert’s sparkle loses some of its shine for it turns out Norbert is not as au fait with the art of book reading as he professes. In fact, he doesn’t even know what to do with the book they hand him. It’s difficult to turn on, he’s not sure which way to hold it, and none of the words makes any sense at all.

Norbert’s friends sniff subterfuge and begin to lose confidence in this braggart’s skills just as Norbert’s own sense of confidence begins to falter. It is also at this point that 21st century readers like me may think they have Norbert’s storyline in the bag. Kids! I thought, they don’t even understand the nuances of a real book these days being so digitally blinkered. Bah!

It’s the surprise appearance of Norbert’s dad who reveals why Norbert cannot read this book. Under Dad’s encouraging tutelage, Norbert’s aspirations reassert themselves in glorious bibliomaniac fashion ensuring his newfound love of books and reading will indeed make him a great and wondrous storyteller, one day. 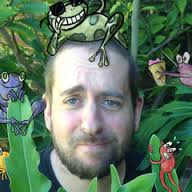 I found this book oddly divisive at first, being led down the wrong library aisle, as it were. Not so, Miss 9 who instantly enjoyed the humour and cartoon-esque illustrations so ably served up by Parkinson. On second look, The Great and Wondrous Storyteller is indeed a picture book that packs in more than it first appears to, a bit like a Tardis.

Norbert’s initial boastful exclamations really describe the wonderful portable physicality of books and stories, and that you can read about anything, anywhere, any time. Lovely.

Norbert is a little monster with giant aspirations, impatient to tackle grown-up-dad things but after being walloped by a hefty dose of self-realisation, quickly learns that baby steps will take him to his goals faster and more safely than exaggerated leaps.

After being exposed as a bit of fibber – green handed as it were – Norbert learns the value of honesty and of not being ashamed of your shortcomings. Lovely. 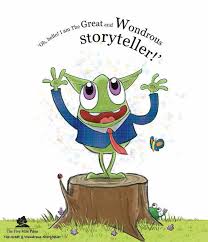 All sound ideas portrayed in a fun colourful way that are best appreciated through the shared reading of this book with an adult.

The Great and Wondrous Storyteller has the potential to enthral tiny readers who are still working out their ABCs, which means it’s ideal for sparking a love of reading for life. Entertaining, quirky and ultimately, heartening. 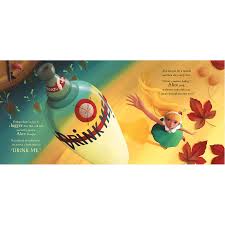 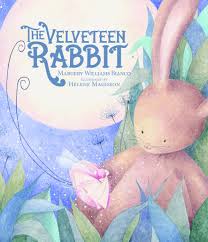 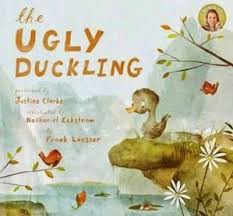 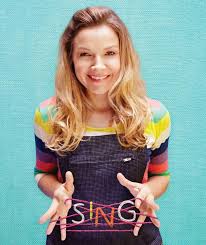 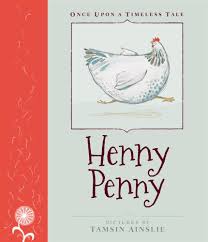